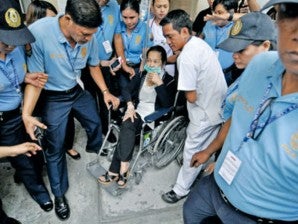 Former President Gloria Macapagal-Arroyo has a life-threatening condition due to complications arising from her earlier surgery to treat her neck ailment, someone close to the Arroyo family said Thursday.

The source, who asked not to be named for lack of authority to talk to media on the matter, said the former President needed immediate operation abroad.

“The choking sensation she experienced was due to the titanium implant that has protruded to her esophagus, causing her to choke,” said the source.

The source said this was the finding of the Quantum electrochemistry examination conducted by cardiologist Robert Anastacio on Arroyo at the Makati Medical Center Thursday.

The former President decided to undergo the examination after experiencing shortness of breath and choking sensations.

“The choking episode is life threatening and a corrective surgery should be conducted on Arroyo as soon as possible,” the source said, quoting Anastacio.

But a doctor present during the examination said the corrective surgery had to be done abroad as “no doctor would touch her here because of her delicate medical situation.”

A lawmaker and ally of the former President, who asked not to be identified, said he was told by Occidental Mindoro Rep. Amelita Villarosa that the medical findings on Arroyo were “disheartening.”

“You’re right, it does not look good,” said the lawmaker when asked if the prognosis was life threatening and if she needed to seek medical treatment abroad.

The source said that present when Anastacio explained the result of the examination to Arroyo were her son, Ang Galing Pinoy Rep. Juan Miguel “Mikey” Arroyo, and the medical team from Veterans Medical Memorial Center (VMMC), where the former President is confined.

The Inquirer tried to contact Anastacio until press time but was unable to reach him.

The former President sought medical treatment abroad last year but was prevented from leaving the country.

At that time none of Arroyo’s doctors gave any hint to the media that her medical condition was life threatening.

In a dramatic airport showdown last November, the Aquino administration stopped the former President and her husband Jose Miguel “Mike” Arroyo from boarding a Hong Kong-bound plane and leaving the country, despite a Supreme Court order allowing her to seek medical treatment abroad.

The wheelchair-bound Arroyo, wearing a neck brace, and her husband were supposed to take a Dragon Air flight leaving for Hong Kong at 8:50 p.m. on Nov. 15, 2011, for medical treatment but immigration officials barred them from taking the flight.

The Aquino administration claimed that Arroyo had wanted to leave the country to evade criminal charges against her.

Dr. Nona Legaspi, head of VMMC, where Arroyo is detained on a charge of electoral sabotage, a nonbailable offense, neither denied nor confirmed the source’s information on Arroyo’s medical condition.

However, she said, “Whatever Dr. Anastacio’s findings on Thursday’s Quantum examination on the former President we could confirm.”

Legaspi said she could not give an official statement on the results because the examination was not conducted in VMCC.

She added that a medical team from the government hospital observed the examination at the Makati Medical Center.

Legaspi said Arroyo, now a Pampanga representative, was back at the presidential suite of  VMMC after the examination.

It was Arroyo’s decision to undergo the Quantum electrochemistry exam, according to the VMMC doctor.

The government doctor added that the court also left it to Arroyo to schedule her examination.

“She gave us two dates, May 10 or May 11, she said, depending on the availability of the doctor who will conduct the test,” Legaspi said.

On a coaster, Arroyo left the VMMC compound in Quezon City at around

7 a.m. with her doctors amid tight security, police records showed.

The President first underwent cervical spine surgery on July 29, 2011, at St. Luke’s Medical Center in Taguig City, four days after she was brought to the hospital due to severe pain in the upper limbs, which doctors said was a result of nerves being compressed in the neck area.

She had to undergo a “revision” surgery on Aug. 10 last year  after it was found that the implants connecting four levels of her spine had been dislodged by what they initially thought was an infection.

The doctors later said the problem was traced to Arroyo’s poor bone quality caused by hypoparathyroidism, an endocrine disorder in which the parathyroid glands in the neck do not produce enough parathyroid hormone that helps control calcium, phosphorus and vitamin D levels in the blood and bone.

On Aug. 24, Arroyo went through a third operation. Doctors reconstructed the anterior part of her cervical spine using a titanium mesh cage with a bone graft that was harvested from her pelvic bone. With reports from Gil Cabacungan and Inquirer Research