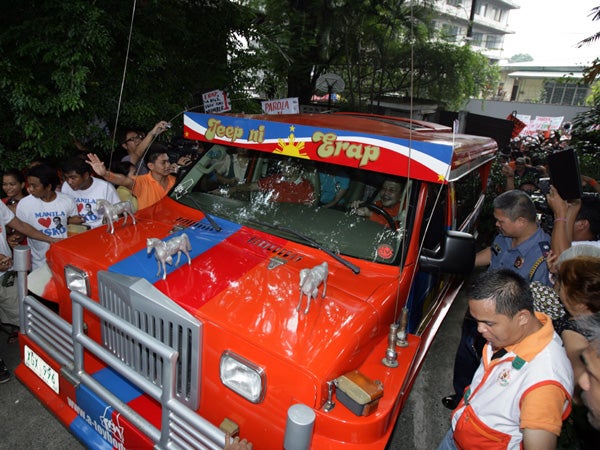 Former president Joseph 'Erap' Estrada drives on a jeepney with incumbent Vice Mayor Isko Moreno as he moves to his new house in Sta. Mesa, Manila Wednesday from his home on Polk Street, North Greenhills, San Juan. Estrada will run for Manila mayor in the 2013 polls. INQUIRER/NIÑO JESUS ORBETA

MANILA, Philippines—Ousted president Joseph Estrada on Wednesday finally confirmed he is running for Manila mayor in 2013.

With much fanfare, Estrada made the confirmation on his first day in his one-story home in a spacious compound on 589 Manga Avenue in Sta. Mesa, Manila.

Since last year, Estrada had been evasive about confirming rumors he will run against incumbent Manila Mayor Alfredo Lim in the coming local polls, even though his move to Manila was widely perceived to be in compliance with the one-year residency required of local election candidates.

Before Wednesday’s move, Estrada was a longtime resident in a gated community in the upscale Greenhills area in San Juan City. 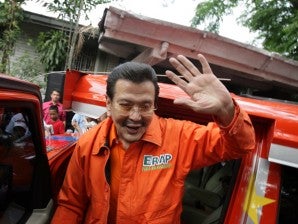 He announced the same to a crowd of supporters gathered inside the compound, telling them point-blank that he was there to declare his candidacy for mayor of Manila.

He implied, however, that he will only run for one term.

On Wednesday morning, Estrada drove to Manila in his “Jeep ni Erap” tailed by a convoy of supporters and three trucks of furniture. Domagoso sat in front with him while his wife, Loi, rode in the passenger seat behind them.

Estrada’s exit from his home on Polk St., North Greenhills, San Juan was relatively quiet, a stark contrast to his entrance in Sta. Mesa, Manila, where he was greeted by fans in orange shirts bearing welcome banners and repeatedly shouting his nickname: “Erap!”

In an earlier interview, Estrada’s spokesperson, Ferdie Ramos, said Estrada will be transferring his voter’s registration to Manila on Thursday noon.