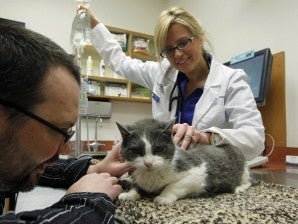 In this Thursday, April 12, 2012 photo, Girly, an 18-year-old cat who has been diagnosed with kidney disease, gets a subcutaneous injection of lactated ringers solution, or LRS, from veterinarian Dr. Nina Nardi as her owner Nate Glass watches, at Banfield's veterinary hospital in the Canoga Park district of Los Angeles. Kidney disease is one of the leading causes of death for cats, but there is no cure and no known cause. AP/Reed Saxon

LOS ANGELES – Kidney disease is one of the leading causes of death for cats, but there is no cure and no known cause.

One in 12 older cats has chronic kidney disease, according to Banfield Pet Hospital’s just-released 2012 State of Pet Health Report.

Banfield, the largest veterinary practice in the world with 800 hospitals in 43 U.S. states, based its report on medical data from more than 2 million dogs and nearly 430,000 cats seen by its veterinarians.

Acute kidney disease, caused by eating antifreeze, grapes, lilies or other poisons, can be cured if treated quickly enough. “If you catch it, you can treat it,” said Dr. Nina Nardi, chief of staff at Banfield’s Canoga Park hospital, 25 miles (40 kilometers) northwest of Los Angeles.

But chronic kidney disease is much more common, more progressive and irreversible, she said. Treatment is aimed at easing pain and prolonging a quality life.

Nate Glass can only try to ease the pain of his cat Girly, who he rescued as a kitten after she’d been shot with a BB gun in an alley behind a dollar store.

Nardi, Girly’s vet for the past five years, tested her for kidney disease because she lost three pounds (1.3 kilograms) between exams.

“It shocked me,” Glass said. “I didn’t think she was three pounds lighter. She still looked as fluffy as she ever did.”

The first thing vets do for a cat with chronic kidney disease is hydrate it, Nardi said. “Fluids reduce the filtration load on the kidneys,” she explained.

She put Girly on an IV for three days, prescribed a special diet that cut down on protein and salt and made sure she had medicines for nausea and vomiting.|
Girly now goes in twice a week for subcutaneous fluid treatments, where the liquid is injected beneath the shoulder blades.

Kidney transplants can ease pain and help a cat live longer, but they are rare and cost between $8,000 and $18,000, said Dr. Chad Schmiedt, the surgeon in charge of the transplant program for the University of Georgia’s College of Veterinary Medicine.

Watch your cat, Nardi advised. Too often, a dog will throw up once and its owner rushes to the vet, but a cat might throw up every day and no one will take it in, she said.

And she thinks love and attention can be almost as important as water. One of the worst cases she ever saw was a cat in the late stages of the disease.

“You wouldn’t have given her more than six months,” she said. But the cat had a special owner, she said, and lived for 2½ years.