BUTUAN CITY, Philippines—An inferno at a three-story garment store in this southern Philippine city before dawn Wednesday killed 17 employees, most of whom were women who were asleep and trapped on the top floor, officials said.

The blaze, which started shortly before 4 a.m., reached the general alarm before it was put out at 6:15 a.m., said Gamba.

Store employee Mylene Tulo, who escaped with two co-workers, said she was roused from sleep as the fire spread rapidly in the third-floor office where they slept. Amid the inferno and yells for help, she managed to dash out with her colleagues. They sustained minor burns on their arms.

“We wanted to rouse others from sleep, but the fire was already too strong,” a stunned Tulo said.

At least 20 employees, mostly women, were sleeping at the store when the fire broke out, said city police chief Pedro Obaldo.

Further investigation was still being conducted to determine the cause and origin of the fire, he said.

He said the building, previously a theatre before being turned into a commercial center, was being rented by ready to wear retail store Novo Jeans and Shirts, Western Union, Smart Wireless, Globe, and St. Peters.

Many stores in the Philippines allow their employees to sleep over, especially those with faraway homes. 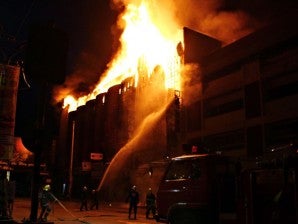 Relatives and friends, most of them in shock and tears, gathered in search of loved ones in front of the building, where police stood before body bags with the victims’ remains.

Obaldo said investigators were trying to determine what sparked the fire and if the owners violated fire regulations.

A lack of firefighting equipment and personnel coupled with safety violations has resulted in major fire disasters in the Philippines, especially in shantytowns. A 1995 inferno that gutted the Ozone Disco Pub in Quezon City, the capital, killed 162 people.