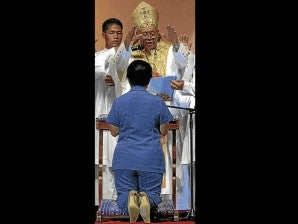 Archbishop Emeritus Oscar Cruz, a staunch antigambling advocate, urged colleagues in the Church to come clean and openly admit if they were among the seven bishops reported to have received Mitsubishi Pajeros from the Arroyo administration.

Cruz said silence could bring down the whole Catholic Church hierarchy. “Whether this is proven by the PCSO (Philippine Charity Sweepstakes Office) or not, they should come out,” he said.

PCSO Chair Margarito Juico has disclosed that the charity agency is verifying reports that Arroyo used its funds to get the support of a number of bishops, giving them vehicles before she stepped down from office last year.

Juico has added that allies of Arroyo on the previous PCSO board left the agency with some P4 billion in debt.

“They (the bishops) should tell the truth, admit that they have received a vehicle and for what reason or purpose so they can explain if it was provided as a personal favor,” Novaliches Bishop Emeritus Teodoro Bacani said at a Church forum on Tuesday.

At the forum in Intramuros, Manila, Cruz and Bacani reminded their colleagues of a collective policy adopted by Catholic bishops six years ago against soliciting and receiving funds from illegal and institutionalized gambling.

Cruz said that even if the PCSO would not be able to validate such reports, “it doesn’t mean that they are lies.” He said those concerned should speak up. “Otherwise, the whole hierarchy is involved.”

In Mindanao, at least two bishops—Jesus Dosado of Ozamiz and Juan de Dios Pueblos of Butuan—own a Mitsubishi Pajero, the Inquirer learned.

Dosado has a gray Pajero, which is often used by Church-run radio station dxDD, a source in the bishop’s residence in Ozamiz City said.

The Inquirer tried but failed to reach Dosado for comment.

But Caloocan Bishop Deogracias Iñiguez said Juico’s disclosure was a delicate matter that must be validated.

Pueblos uses a blue Pajero. His aide, Fr. Lito Clase, begged off from issuing any comment, saying the bishop was not aware of the issue.

Clase, executive director of the Caraga Conference for Peace and Development, an advocacy group formed during Arroyo’s term, was also tightlipped when pressed to confirm if Pueblos owned the old Pajero he was using in public engagements in Butuan City.

Earlier this month, Pueblos, a known ally of the Arroyo administration, called on President Aquino to resign over alleged irregularities committed by his party mates, classmates and shooting buddies.

Bishops previously identified with the so-called “Malacañang diocese” may be among those who received expensive cars which the Arroyo administration had financed using PCSO funds, according to an Inquirer source in the Church.

“There was this ‘Malacañang diocese,’ the members of which are known to all the bishops,” said the source, who requested not to be named given the sensitivity of the matter.

These bishops were supposedly given grants “to handle” by former President Gloria Macapagal-Arroyo, including vehicles and projects, said the source.

Talk of the new “ecclesiastical boundary” came about during Arroyo’s turbulent years in Malacañang, having been linked to election fraud, the “Hello Garci” controversy and the anomalous $329-million NBN-ZTE deal.

Bacani said the previous administration had resorted to efforts to soften the stance of the bishops and to “divide and conquer” the Church.

“But I am not sure if this (giving of cars) was part of that strategy,” Bacani said at the forum hosted by the Catholic Media Network.

At the height of Arroyo’s political problems, it was reported that the Philippine Amusement and Gaming Corp. (Pagcor) had offered cash donations to bishops ranging from P300,000 to P500,000.

Even if they were not using Pajeros, some Catholic bishops refused to comment on the issue.

Basilan Bishop Martin Jumoad said “it’s difficult to give a reaction to that.” Jumoad uses a Nissan Strada.

Cotabato Bishop Orlando Quevedo, a former president of the Catholic Bishops’ Conference of the Philippines, rides in a Toyota Innova.

Not one of the Cebu bishops received a Pajero from the PCSO, according to two officials of the Cebu Archdiocese.

But the head of a Church-based organization acknowledged seeking and receiving funds from the PCSO until 2009.

In Pampanga, Archbishop Paciano Aniceto said he did not receive a Mitsubishi Pajero, other vehicles or money from the PCSO, any government charity institutions or from Arroyo.

Aniceto uses a Toyota Innova, a service vehicle from the Mother of Good Counsel Seminary. He and his staff in the archdiocese use a Mitsubishi Montero for official work, his secretary, Fr. Francis Mallari, said.

In Nueva Vizcaya, Bishop Ramon Villena, another bishop perceived to be close to Arroyo, was not in his office when the Inquirer on Tuesday tried to seek his reaction to the vehicle donations from the PCSO.

The bishop does not have a Pajero and the diocese has no vehicle donated by the PCSO, said Villena’s secretary.

The Inquirer tried to reach other Catholic bishops in northern and Central Luzon for reactions, but they did not take calls. They neither replied to text messages.

A number of Catholic bishops did not only get expensive cars out of public funds, but also benefited in other forms during the term of Ms Arroyo, said Fr. Robert Reyes, a critic of the previous administration.

“Not just the Pajeros. She constructed houses (for priests), convents, cathedrals, and gave away cars,” Reyes said in a phone interview.

Reyes, who is now based in Palawan, said the Church’s weakness was exploited by a President who knew how to silence moral and spiritual leaders through corruption.

Reyes, who claimed to have an idea who these bishops were, said the practice of taking donations from Arroyo thrived, not only before she stepped down, but also during the “crisis points” of the past administration like the election cheating scandal in 2005.

He said the money, used for “donations” to the churches, did not only come from the presidential or emergency fund, but also from the buckets of the PCSO and Pagcor. The latter agency, in turn, has divided Church leaders on whether to support gambling or not.

Reyes said the creation of the Presidential Advisers on Ecclesiastical Affairs by Arroyo was also meant to determine who among the bishops most likely needed vehicles or church buildings.

“The vital and fundamental role of the Church is to complain and set the records straight (in government). We (were) weakened as an institution because of this [money],” he said.

He said with the auditing of the expenditures of the past administration, it was time for the Church to come clean. He urged the bishops involved to return the Pajeros to the government.

“They don’t have to make it public or announce it. Just listen to their conscience,” he said.

Bishop Modesto Villasanta of the United Church of Christ in the Philippines–Eastern Mindanao Jurisdiction, said “there has to be an investigation to know if this (vehicles for bishops) is true or just hearsay.”