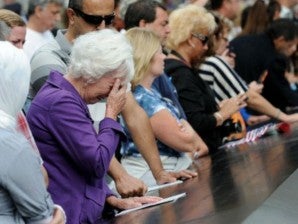 A woman cries while looking at the names inscribed at the North Pool of the 9/11 Memorial during tenth anniversary ceremonies at the site of the World Trade Center September 11, 2011, in New York. AFP PHOTO/POOL/Justin Lane

US Naval Base at Guantanamo Bay –Relatives of victims of the September 11 attacks expressed hope Friday that the plot’s perpetrators would get the death penalty at a Guantanamo tribunal.

Cliff Russell was among six family members who won a lottery to attend the arraignment proceedings on Saturday for the self-proclaimed mastermind of the attacks, Khalid Sheikh Mohammed, and four other suspects.

“I’m not looking forward to taking somebody’s life… but it’s the most disgusting, hateful awful thing I ever could think of; it’s crazy,” said Russell, who lost his firefighter brother when the Twin Towers collapsed in New York.

“I’m confident with it (the sentence) being the death penalty,” he added, noting that the proceedings were taking place nearly 11 years after the attacks under the special tribunals known as military commissions, rather than a civilian court on US soil.

“I don’t see five of these guys brought in the court house in downtown New York, I don’t see it as being a safe thing to do; this is much safer.”

The hearing marks the second time the United States has tried to prosecute the 9/11 suspects under the military commissions system, after the proceedings were put on hold as President Barack Obama sought to bring the case to a federal court in New York just steps from their crime.

But Obama faced stiff opposition in Congress, where lawmakers prevented his administration from transferring detainees from the US naval in southern Cuba to the United States. The stalemate also scuttled Obama’s plans to shutter the detention center, where 169 detainees remain.

Tara Henwood-Butzbaugh, who lost her brother in the attacks, said the arraignment “is where it should be.”

Other relatives who did not win the lottery will be able to watch the proceedings via closed-circuit television at four US military bases.