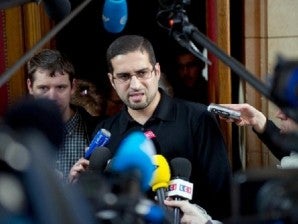 Hilam Hicheur (C), brother of Adlene Hicheur who worked for Cern (European Centre for Nuclear Research) in Switzerland, speaks to journalists following the judgment of the trial on May 4, 2012 at the Paris Courthouse. Adlene Hicheur, already on a 2-year pre-trial detention, was sentenced to four years of imprisonment on suspicion of being connected to an Al-Qaeda's North African wing (AQMI) alleged to have planned attacks in France. AFP/BERTRAND LANGLOIS

PARIS – A Paris court sentenced a Franco-Algerian nuclear physicist to four years in jail on Friday after he was convicted of plotting with Al-Qaeda’s north African branch to carry out terror attacks.

Police arrested Adlene Hicheur, a researcher studying the Big Bang at the birth of the universe at the European Organization for Nuclear Research (CERN), in October 2009 after intercepting emails to an alleged contact in Al-Qaeda.

Hicheur, 35, who has been behind bars since his arrest, admitted at the start of his trial in late March that he was going through a “turbulent” time when he wrote the mails but denied he intended to carry out any attacks.

His father embraced him in the Paris courtroom before he was taken off to serve his term. His lawyer said the verdict was “a legal scandal” because his client had been convicted merely on “words exchanged on the internet”.

Hicheur’s trial on a charge of “criminal association as part of a terrorist enterprise”, began a week after police shot dead the Franco-Algerian gunman Mohamed Merah, who killed seven people in and around the city of Toulouse.

When Hicheur was arrested at his parents’ home near CERN, the research institute which lies on the Franco-Swiss border near Geneva, police discovered a trove of Al-Qaeda and militant Islamist literature.

France’s DCRI domestic intelligence agency’s suspicions had been raised after a statement from Al-Qaeda in the Islamic Maghreb (AQIM) was sent to President Nicolas Sarkozy’s Elysee Palace in early 2008.

Following the message police carried out surveillance on several email accounts including Hicheur’s and his exchanges with Mustapha Debchi, an alleged AQIM representative living in Algeria.

In the emails Hicheur suggested “possible objectives in Europe and particularly in France”, mentioning for example a French military base at Cran-Gevrier, close to CERN.

Asked by Debchi if he was “prepared to work in a unit becoming active  in France,” Hicheur replied: “The answer is of course YES”.

Hicheur told the court that the incriminating emails were written at at time when his “physical and psychological state” was impaired and he was on medication while he was on sick leave for a slipped disc.

“I understand that some of the passages may have been uncomfortable or worrying… There was nothing behind it,” said the scientist, who could have received up to 10 years in prison.

But the court said in its ruling that the researcher had provided logistical support to “various terrorist structures of the radical Islamist underground by participating in internet discussions with an AQIM member”.

Hicheur had done so by “giving his agreement as to the setting up of an operational cell in Europe and defining the future targets of this cell, and finally by setting up projects to financially support AQIM,” it said.

The court sentenced him to a total of five years but decided to suspend one of the years in prison because of the “humiliation” which the researcher felt at the colonization of Algeria by France.

“One feels, running through the messages of this proud and intelligent man, the pain of belonging to a people which was effectively colonized for two centuries by representatives of his country of adoption,” the ruling said.