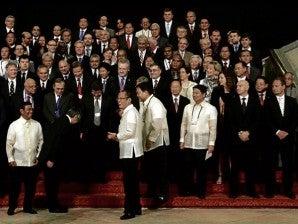 WELCOME TO MANILA. ADB president Haruhiko Kuroda greets finance officials from 67 countries with the traditional Japanese bow on Friday. He is joined in welcoming the delegates to the 45th annual meeting of the ADB board of governors by President Aquino, Vice President Jejomar Binay, Finance Secretary Cesar Purisima, and BSP Governor Amando Tetangco. RAFFY LERMA

The Southeast Asian region, with an estimated population of 600 million, is anticipated to join the ranks of China and India as a major economic growth force in Asia should its constituent countries succeed in integrating their economies by 2015.

If the integration of the Association of Southeast Asian Nations (Asean) is implemented as planned, trading of goods, inter-country investments and labor mobility within the region will become much easier, said Changyong Rhee, chief economist of the Asian Development Bank (ADB).

This will significantly reduce the cost of production for the businesses and economic growth of member-countries and of the entire region will accelerate, said the ADB’s top economist.

With this favorable scenario, Southeast Asia will become more attractive to investors and thus corner more direct investments from multinational companies from outside the region, he said.

“A new growth force is coming in Asia,” Rhee told a press conference on the sidelines of the 45th annual meeting of the ADB board of governors that is being hosted this year by the Philippines.

The 10 countries of Southeast Asia, which together make up the geopolitical and economic organization called Asean, are Singapore, Indonesia, Vietnam, Malaysia, Thailand, Cambodia, Laos, Brunei, Burma (Myanmar) and the Philippines.

The Asean—established on Aug. 8, 1967, in Bangkok, by the five founding members composed of Indonesia, Malaysia, the Philippines, Singapore and Thailand—aims at achieving full economic integration by 2015, creating a single market and production base that will allow the free flow of goods, services, investment, capital and labor throughout the region.

Under the Asean integration plan, tariffs on most goods coming from member-countries will be brought down to zero or near-zero, their financial systems will be integrated, and employment restrictions will be eased so that Southeast Asians would find it easy to find jobs in any country within the region.

Once Asean integration is completed, the region will be able to corner more foreign direct investments, which now mostly go to China and India, said Rhee.

China and India are currently leading growth in Asia and the world, with gross domestic products expanding between 8 and 10 percent over the past few years. Southeast Asian countries are also exhibiting decent growth rates, but at a slower pace.

With integration, growth rates of Southeast Asian countries would be expected to be faster, initially inching closer to and eventually matching those of China and India.

Some economists and social science experts, however, believe that Asean integration could be derailed if the ongoing conflicts among some Asean members with China over ownership of territories on the West Philippine Sea (South China Sea) is not resolved soon.

Asean members Vietnam, Brunei, Malaysia and the Philippines are claiming ownership in whole or in part of the resource-rich Spratly archipelago, which is also claimed by China and Taiwan.

China and the Philippines are currently facing off at Panatag Island (Scarborough Shoal), which the Philippines says is not in the disputed Spratlys but is well within its 200-mile economic zone, but which China also claims for its own.

Yu Yongding, a professor from the Chinese Academy of Social Sciences and one of the Chinese delegates to the ADB event, said it would be difficult to implement Asean integration if the geopolitical conflict is left unresolved.

Economic Planning Secretary Cayetano Paderanga Jr. agreed with Yu, although he expressed optimism that Asian policymakers will be able to resolve the conflict soon.

While Asia remains a potential global growth driver, ADB president Haruhiko Kuroda said Asian countries have to expand their goal from merely sustaining healthy economic growth rates to having an economic growth that is “inclusive,” “green” and “knowledge-based.”

Growth must be inclusive, meaning it should benefit not only the middle class and the rich but also the poor, Kuroda said.

Kuroda noted that while many Asian countries have been experiencing decent growth rates, their expanding economies have so far failed to significantly bring down poverty levels.

In the case of the Philippines, for instance, the country has managed to continually grow despite the global economic crisis, but its poverty incidence remains high, at 26.5 percent as of end-2009.

“There are still hundreds of millions of Asians living on $1.25 a day,” Kuroda said in remarks at the opening session of the ADB governors’ meeting.

Some of the proposals raised to reduce poverty include heavier investments in public education and more lending to micro enterprises.

Lastly, growth must be knowledge-based, meaning enterprises must invest in research and development and in technology to help accelerate the growth of production, Kuroda said.

He echoed statements made by other economists at the meeting that more extensive use of technology is necessary for emerging Asian economies like the Philippines to escape the middle-income trap and graduate to becoming an advanced economy.