President slammed for ‘disconnect’ with PH laborers
By: Jeannette I. Andrade, Philip C. Tubeza - @inquirerdotnet
Philippine Daily Inquirer / 12:18 AM May 02, 2012 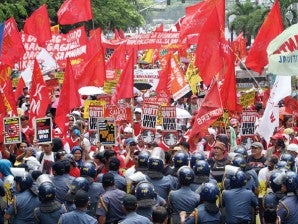 TWO IN ONE Antiriot police block protesters on their way to Mendiola from getting too close to the United States embassy in Manila on Tuesday. The militants condemn last week’s Philippine-US joint military exercises even as they also take to the streets to demand wage increases and better benefits on May Day which is observed almost universally as Labor Day. NIÑO JESUS ORBETA

The “good news” that President Benigno Aquino III announced at his breakfast meeting with labor leaders on Labor Day Tuesday was not good enough for workers.

The package of benefits that Mr. Aquino unveiled included an P11.2-billion educational assistance fund for members of the Social Security System and the Government Service Insurance System; a P1.1-billion scholarship program for the youth; and the advance release in June of P2.7 billion in salary increases for government employees.

“Another good news is that there will be a quarterly dialogue to discuss and address the demands of the workers,” said Budget Secretary Florencio Abad who announced the package of benefits before thousands of workers gathered at Don Chino Roces (formerly Mendiola) Bridge near Malacañang.

The President rejected calls for a P125 across-the-board increase for minimum wage earners, saying the economy could not afford it, that it would scare off foreign investors and would lead to layoffs.

Some 15,000 members of the newly formed Nagka1sa coalition of labor groups gave Abad a courteous applause while he left the stage along with presidential spokesperson Edwin Lacierda and presidential adviser on political affairs Ronald Llamas.

“Promises again. I hope they make good on their word this time,” one of the street sweepers, who asked not to be named, said.

Lorna, 25, said MMDA street sweepers were paid P254.55 daily as contractual workers and had not been given a chance to be regular employees.

“I have been working here for three years. We have to buy our own brooms and dustpans, and pay for our own uniforms,” she said.

Lorna said that she was assigned to sweep 1,000 square meters of Edsa without hazard pay. “They promised to raise our daily pay to P404 last year but until now they have not. The increase would have meant so much to our families,” she said.

“President Aquino disappointed the thousands of workers who went to Mendiola waiting to hear his good news. He failed the workers and yet he doesn’t get it,” said Alan Tanjusay, ALU-TUCP advocacy officer.

Tanjusay said President Aquino’s computation to illustrate how unreasonable the [P125 across-the-board] increase for minimum wage earners was a signal to regional wage boards and Congress to thumb down any significant wage increase.

“It is also to project that he knows the issue very well when in fact he obviously doesn’t,” he added.

[In his computation, the President said the country could not afford the P125 across-the-board wage increase for 40 million workers as the amount would cost the economy a whopping P1.43 trillion.

Mr. Aquino was referring to the entire labor force of 40.3 million as of January 2012, both employed and underemployed. Among the 37.4 million who were employed were 4.3 million unpaid family workers, according to the National Statistics Office (NSO).]

Labor Secretary Rosalinda Baldoz defended the President. “The President just can’t remove the present system of wage boards because that is the law,” she told reporters at the Department of Labor and Employment’s jobs fair in Pasay City.

Baldoz said wage boards in Metro Manila, the Ilocos Region, Central Luzon and the Cordillera Administration Region were tackling wage hike petitions and would come out with their decisions soon.

“The commitment of NCR [Metro Manila] is that they’ll come out with their decision within this month. Even if the anniversary of the last wage hike is still on May 26, they decided on Monday to already start with the public consultations,” Baldoz said.

PM chairman Renato Magtubo said Grace Lee, the President’s  “girlfriend,” was “far luckier than private sector workers” for Mr. Aquino had “surprises for (her) but no gifts for (workers) on Labor Day.”

“The recently released ‘Global Wage Report’ of the ILO (International Labor Organization) notes that workers in the Philippines are among the lowest paid in the world and wages are falling still. But President Aquino remains deaf and blind to the call for salary increase,” Magtubo said.

He said low wages particularly afflicted women workers and even those with high educational attainment.

KMU said the administration had nothing to brag about the country’s employment situation, saying Mr. Aquino’s first full year in office witnessed a measly decrease in unemployment.

The labor center cited data for 2011 from the NSO showing a reduction in the ranks of the unemployed from 7.3 percent to 7 percent, amounting to a measly 100,000 reduction.

The KMU also said that the increase in the underemployed from 18.8 percent in 2010 to 19.3 percent in 2011—which translates to more than 186,000—showed that it was low-quality jobs which accounted for the slight increase in employment.

“Despite the growing clamor from workers and the poor, he refuses to junk contractualization and implement a significant wage hike. He blackmails workers voicing these demands with the threat of massive layoffs,”  KMU chairman Elmer Labog said.

At Chino Roces Bridge, most of the protesters, including government employees, food-chain employees, seafarers and hospital workers, clamored for the certification by the President of the security of tenure bill for the public and private sectors as urgent and for a reasonable wage increase.

Magtubo told the Philippine Daily Inquirer that while a P30 minimum daily wage increase would be good enough for a worker to buy a kilo of rice, P90 would be the most workers could ask for to afford a sack of the staple.

It was Magtubo who personally handed a letter for the President to Abad’s group. The letter listed at least six demands which included the immediate passage of the security of tenure bill to do away with contractualization; the President’s support for an across-the-board wage increases for the public and private sectors; repeal of the oil deregulation law and the energy and power industry reform act; and the prevention of violent demolitions in informal settlements.

Abad, addressing the protesters, repeatedly assured that the President would thoroughly study the wish list of the coalition.

Katherine Loh, the subregional secretary for Southeast Asia of the Public Services International, led a contingent of some 70 foreign labor leaders from several Asian countries to ask for the Asian Development Bank to take full responsibility for the energy crisis in Mindanao.

Jeff Johnson, ILO country director, said the Aquino administration was “taking the right path” and was trying to find solutions for the country’s labor woes.

“This is no ordinary Labor Day. Many countries throughout the world had been facing a lot of challenges since the [global] economic crisis of 2008. The challenge we’re facing here in the Philippines is how to turn growth and development into decent and productive work,” Johnson said in an interview at the World Trade Center in Pasay City where the jobs fair was held.

“Is the government on the right path? Yes … They’ve acknowledged the problems and they’re looking at ways to address these. I also know the public can be frustrated, these things take time. Twenty-four months might seem like a lot (but) this administration in the last 24 months had got a lot of things started,” he said. With report a from Julliane de Jesus, trainee