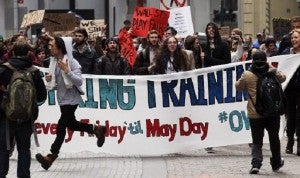 The protests, billed as stretching from New York to California, and from Spain to Australia, raised the possibility of disruption in dozens of urban centers on the date when many countries observe International Workers’ Day.

The day of action comes against the background of a rancorous presidential election campaign in which many voters are angered by the anemic economy, and their perception that Washington serves a self-perpetuating elite.

“While American corporate media has focused on yet another stale election between Wall Street-financed candidates, Occupy has been organizing something extraordinary: the first truly nationwide General Strike in US history,” the OWS movement said on its website occupywallst.org.

“The Occupy Movement has called for A Day Without the 99% on May 1st, 2012,” a statement said, referring to its slogan that a wealthy one percent rules over an increasingly powerless 99 percent.

However, the scale and impact of the protests will be a test of the Occupy movement’s ability to stay relevant.

OWS appeared in New York for the first time last September, with activists taking over a square near Wall Street to protest against government bank bailouts, corporate salaries, and what they said was a hopeless economic landscape for ordinary people.

However, after police across America ejected OWS protesters from public squares two months later, the movement struggled to stay in the limelight and to back up its claim to represent the mainstream public.

The New York chapter promised a day long program Tuesday of sit-ins, rallies and marches, some of which had received police permits and others, like a “wildcat march” in lower Manhattan, had not. The main march was scheduled for the afternoon rush hour, passing from Manhattan’s Union Square to the Wall Street area.

Hundreds of people have been arrested in New York and charged with mostly minor infractions since the demonstrations started last year.

In San Francisco, Occupy members called for a protest on the famed Golden Gate Bridge, an important transport link. “This May Day we look forward to seeing strong, powerful picket lines, unlike anything the Golden Gate Bridge bosses have seen before,” the local Occupy website said.

In Los Angeles, demonstrators were planning a coordinated “slow, city-paralyzing, carnival-esque descent into the center of the city.” Four separate groups of cars and bicycles will plan to converge from different directions to “light society’s ills,” the LA website said.

In Seattle, Occupy announced large-scale plans “to halt the flow of capital, reclaim a tool of resistance, and unify movements against exploitation, repression, and corruption.”

The “general strike” would target “exploitation, repression, and corruption,” according to the statement.

May Day protests by groups connected to the Occupy movement were also announced in Amsterdam, Athens, Auckland, Barcelona, London, Melbourne, Seoul and Toronto, among other world cities.