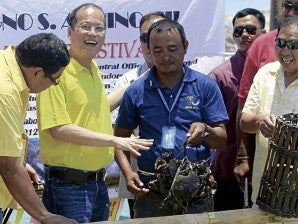 BONGABONG, Oriental Mindoro—President Benigno Aquino III on Sunday announced that government workers would get their pay raise one month ahead of its planned release.

The President said this was his “surprise” for government workers on Tuesday when the nation celebrates Labor Day.

“It’s a substantial number of zeroes,” Mr. Aquino said of the fourth tranche of a pay hike under the Salary Standardization Law 3 (SSL 3).

He said the question was whether the government could advance this final tranche of the SSL 3.

“The SSL 3 can be completed perhaps one month earlier than the planned implementation,” said the President, who was here to celebrate the birthday of Oriental Mindoro Governor Alfonso Umali, a close ally in the Liberal Party.

The fourth tranche is scheduled to be released in July but Budget Secretary Florencio Abad told the Philippine Daily Inquirer that the pay raise amounting to P2.7 billion for the 1.6 million government workers would be released on June 1.

On Labor Day last year, Mr. Aquino ordered the release of the third tranche of SSL 3 one month earlier, in June.

On Tuesday, the President said he would have breakfast and meet with labor group leaders in Malacañang. He said he had been preparing since last week for possible questions that labor leaders might raise during the meeting.

The Manila Police District (MPD) announced Sunday it was preparing for massive Labor Day rallies against the Aquino administration in the capital.

Chief Inspector Erwin Margarejo said police would be placed on heightened alert by noon Monday following an announcement by 40 labor groups that they would mount a 20,000-strong march on Mendiola to press demands for wage increase, security of tenure of laborers and an end to the widespread practice of “labor contractualization”

“We have more than enough personnel. We will be receiving augmentation from other police districts and provinces,” said the MPD spokesperson.

Police will be deployed in areas where protests are traditionally held, such as the Mendiola Peace Arch and bridge near  Malacañang, the US Embassy, and Liwasang Bonifacio near the Manila Post Office.

He said the MPD had also been holding dialogues with the labor groups to “set parameters” for their rallies.

“I cannot speculate what will happen, but I would like to remind our laborers to greet the day peaceably. The police will exercise maximum tolerance and ensure their constitutional right to assembly, but we will also have to maintain peace and order,” Margarejo said.

In a statement, the Kilusang Mayo Uno (KMU) said that even before Labor Day, the group had been conducting protests in Metro Manila at the Department of Labor and Employment, the regional wage boards, the Pandacan oil depot, the head offices of the oil cartels, Malacañang and the US Embassy.

The KMU said this year’s Labor Day protest, dubbed “Araw ng Paniningil at Paglaban,” would “condemn Aquino not only for failing to deliver on his promises but for upholding the interests of US monopoly-capitalists, local big capitalists and big landlords on all major issues faced by workers and the poor.”

Senior Superintendent Generoso Cerbo Jr. also said that all units of the Philippine National Police in Luzon, Visayas and Mindanao were to go on high alert this afternoon in anticipation of tomorrow’s labor rallies.

“We strongly encourage concerned units to initiate the dialogues involving the local government units and participating groups for the smooth and peaceful celebration of Labor Day,” said Cerbo, the PNP spokesperson. With a report from Jaymee T. Gamil