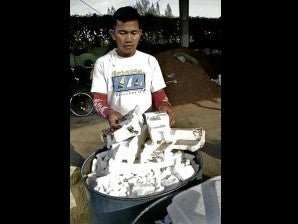 Garbage in, garden delights out.

The Marikina City government since Monday has been churning out hundreds of paving blocks out of used styrofoam packaging and plastic wastes, in a project that shows how recycling can both protect and beautify the environment.

It only takes two workers, a shredder, and a “styro-plastic densifier” (a three-meter-high piece of equipment fed with raw materials through a cylindrical mouth), to turn trash into two-inch thick blocks durable enough for parks, indoor flooring, or sidewalks.

Apart from providing the city government with an alternative source of construction materials, the project can help reduce Marikina’s garbage output and its P30-million annual budget for collecting and hauling household waste to a landfill in Rodriguez, Rizal province.

The shredder and densifier were acquired by the city government for P400,000 under a project dubbed “From Wastes to Landscape.”

“The savings the city will get and the benefits to the environment will definitely surpass the cost of acquiring the technology,” according to Oliver Villamena, the assistant city environmental officer. 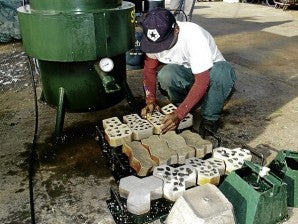 The recipe is quite simple: For every 20 kilos of styrofoam and a corresponding amount of used cooking oil, the machines can produce at least 21 blocks.

“These products will never be wasted. Imagine an area measuring 2 meters by 3 meters that must be covered with 150 blocks. How much styrofoam would that require? Perhaps around 150 kilos,” he said.

For a steady supply of cooking oil, Villamena said, residents had been asked to keep their used oil for collection every Sunday.

“Despite the costs, the city will benefit from the project in many ways,” Villamena said. Among the other the items the technology can produce are table tops, chairs, boards and synthetic timber planks, he said.

The City Environmental Management Office (Cemo) of Marikina pushed for the project after its personnel learned about the system in seminars held by the Department of Science and Technology (DOST) last year.

The Cemo has since been collecting styrofoam and plastic wastes from households across the city, which are initially stored and then sorted at a facility in Barangay Sto. Niño. The materials are then shredded into flakes and then melted in used cooking oil under controlled temperatures through the densifier.

Richard Cruz, one of the workers who operate the machines, said the job was definitely an “upgrade” from his previous work as a street sweeper.

“It’s still a bit complicated for now, but we are trying to perfect the shapes,” Cruz said of his first-week output.