31 rare turtles smuggled out of PH returned by Hong Kong 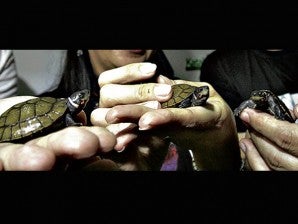 VANISHING BREED. Government officials hold three of 31 rare turtles, which Hong Kong returned during a news conference at Ninoy Aquino International Airport on Friday. They were captured in Palawan last February and will be returned to their natural habitat. GRIG C. MONTEGRANDE

They could have ended up as delicacies in some restaurant in Hong Kong, or as someone else’s pets. But they also represented longevity and good luck. And that held true for most of the 36 rare turtles which were captured and smuggled out of the Philippines two months ago.

On Friday, 31 of the turtles made it back to Manila—alive.

Director Mundita Lim of the Protected Areas and Wildlife Bureau (PAWB) said the repatriated turtles—captured in Palawan in February—seemed to be “in good condition” and that they would be sent back to their natural habitat in the province.

Lim said the 18 pond turtles and 13 box turtles would be quarantined for a month and checked by veterinarians for any signs of stress before they are returned to the wild.

Only about 120 pond turtles are estimated to remain in the wild.

But some bad news: Two juvenile pond turtles and three box turtles, which were among the 36 captured in Palawan, had died while in captivity.

Pond turtles (Siebenrockiella leytensis) are freshwater turtles endemic to the Philippines.  Box turtles, or Cuora amboinensis, are found all over Asia. They make their homes on land and in freshwater bodies. They usually grow to 22 centimeters in length.The pond turtles are listed by the International Union for the Conservation of Nature as “critically endangered,” the highest risk category assigned by the global environment organization for threatened species. The box turtles in the Philippines are classified as “vulnerable” or likely to be endangered.

Environment Secretary Ramon Paje said the repatriation by Hong Kong authorities of the smuggled turtles “would go a long way in strengthening the campaign against illegal wildlife trade within the region.”

“It was obvious that extra effort was taken by the Hong Kong airport and wildlife officers to have these turtles properly handled and processed pursuant to the provisions of Convention on International Trade in Endangered Species of Wild Fauna and Flora,” Lim said.

The Philippines is one of the “hot spots” for the illegal wildlife trade, with poachers and illegal fishermen harvesting corals, turtles, sharks and other marine wildlife in areas such as West Philippine (South China) Sea and the Sulu Sea.

Records gathered by the PAWB showed that the turtles were part of the cargo on board a Cebu Pacific Airlines flight which left for Hong Kong on Feb. 8. Hong Kong customs officers discovered the marine reptiles hidden in a suitcase. A suspect who failed to produce necessary import documents was arrested.

Lim cited the support of the Palawan local government and the Katala Foundation Inc., a Palawan-based nongovernment organization, for the Department of Environment and Natural Resources efforts to protect Philippine wildlife species, particularly threatened endemic wildlife in Palawan.

Lim said the pond turtles were confiscated at the Hong Kong airport from a Chinese student, along with 13 box turtles.

They are prized as novelty pets or food, Lim said. Some also consider them as medicine.

Philippine officials took the unprecedented step of traveling to Hong Kong and retrieving the turtles because they are rare. Their return followed two months of liaison between Hong Kong and Filipino officials. With reports from AP, AFP and Inquirer Research