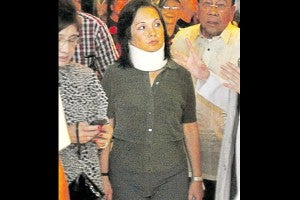 Then President Gloria Macapagal-Arroyo and her allies used the Philippine Charity Sweepstakes Office (PCSO) as their milking cow, leaving the agency P4 billion in debt, or close to a year’s worth of doles for the poor and the sick.

“They ran it to the ground,” said PCSO Chair Margarita Juico, who recently met with Inquirer editors and reporters.

Juico said the directors appointed by Arroyo to the PCSO board “comingled” the funds for operating expenses with those for charity work, thus allowing the agency to spend more than its budget, especially in the last two years in office of the appointees.

Under its charter, the PCSO is mandated to set aside 55 percent of its revenues (P29.5 billion in 2010) from numbers games, such as lotto, Scratch It, Keno online and sweepstakes for prize money; 30 percent for charity; and 15 percent for operating funds.

Juico said that when the PCSO board in the Arroyo administration used up its operational funds, it broke the agency rule to separate charity funds from its general expense account.

The violation was verified by Commission on Audit (COA) reports for 2008 and 2009 that were released recently. The reports questioned the comingling of the charity and operating funds.

Juico pointed out that before 2007, the COA had been making the same findings “over and over again” and the same qualified reports that tended to cloud the real state of PCSO finances. When the COA finally gave an adverse report, those appointed by Arroyo to the PCSO board had already left their seats, Juico said.

“They entered into million-peso contracts with favored media groups and issued hundreds of guaranteed letters to hospitals,” said Juico, who had served on the PCSO board during the terms of Corazon Aquino, Fidel V. Ramos and Arroyo.

Juico resigned in 2005 following the “Hello Garci” controversy that linked Arroyo to electoral cheating and the “Hyatt 10” protest that ensued.

The result: P1 billion in payables to media groups and P3 billion in obligations to hospitals.

While the new management had uncovered scams perpetrated by board members and top officials who got kickbacks from media contracts and fictitious medical claims and hospital bills, the PCSO has to honor the contracts as long as media outfits and medical facilities could show documents to back them up, PCSO General Manager Jose Ferdinand Rojas II said.

Rojas, a son-in-law of Ignacio Bunye, Arroyo’s press secretary, said that when he took over the general manager’s office a year ago, he found nine boxes with P329 million worth of guarantee letters that could be used by beneficiaries to offset their medical and hospital liabilities (excluding doctor’s fees).

“Everybody in the PCSO were issuing guarantee letters left and right when it should have been centralized to protect the charity funds,” Rojas said.

Rojas pointed out that only P4 million of the P329 million worth of guaranteed letters had complete documentation.

Rojas said his office was compiling a list of the media entities that got a windfall from contracts with the PCSO, especially in the last two years of the Arroyo board.

The contracts include the P1.5-billion, five-year deal with film director Carlo J. Caparas, which the PCSO has no choice but to honor after this was upheld by the Office of the Government Corporate Counsel. [The Bureau of Internal Revenue has filed a tax evasion case against Caparas in connection with his contract with the PCSO.]

Juico said that while the 2010 budget for public relations was pegged at P900 million, the board spent P1.7 billion.

She said the current PCSO management had trimmed the budget to P550 million, but it had to ask for a supplemental budget to pay for the PR debts piled up last year.

“(Arroyo) appointed a lot of media members on the board, and they brought in a lot of contracts, which is probably why the ad budget shot up,” Juico said.

While Rojas, a lawyer, reckoned that it would be difficult to include Arroyo in a plunder case being planned against the former board members, Juico said some documents showed that the former President had a direct hand in the finances of the PCSO.

Juico said Arroyo signed “OK” on the Jan. 4, 2010, letter of former PCSO Vice Chair Rosario Uriarte, who requested at least P150 million of the PR fund to be moved to the intelligence fund, which is not audited.

“It’s her board. She’s responsible for their actions,” Juico said, referring to Arroyo, now a Pampanga representative.