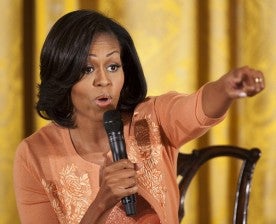 WASHINGTON—US first lady Michelle Obama on Thursday excluded a possible White House run in the footsteps of her husband Barack, saying the job was “really hard.”

The first lady confided in a child visiting the White House during the annual Take Your Child To Work Day who asked her if she would ever run for the highest office in the land.

“No,” Obama exclaimed with a laugh. “Being president is a really hard job and it’s an important job.”

President Barack Obama, who was sworn into office in January 2009, is bidding for a second, four-year term in November elections. His wife suggested she expected him to win.

“Once his terms are over, we’ll go on to do other important things — because there are so many ways that you can help this country and the world, even if you’re not president of the United States,” the first lady said.

“One of the things you learn about yourself as you get older are what are your strengths and what are your interests. And for me it’s other stuff that is not being the president. So I probably won’t run.”

Hillary Clinton, the current secretary of state, remains the only former first lady of the United States to have sought the White House. She lost her bid to Obama during hard-fought Democratic primaries in 2008.