It’s not to scare but UK study sees hotter Earth 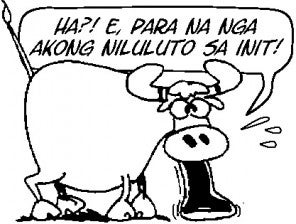 If you think temperatures of up to 37 degrees Celsius in recent days are extremely hot, imagine temperatures 4 degrees higher.

“It seems quite alarmist to do this, but we’re doing this as an argument for action, an argument for adaptation and mitigation as well,” said John Pearson, head of the British High Commission’s Southeast Asia Climate Change Network. “We don’t issue this just to scare people but to help them understand what will happen.”

Britain’s Met Office Hadley Center, a leading climate-change research body, says the Earth’s average temperature would likely rise by 4 degrees Celsius by the end of the century, spawning fiercer typhoons in tropical countries like the Philippines and putting a strain on food resources.

In a round table of experts on climate change and its implications on human security in Makati City on Tuesday, the peace-building organization International Alert and the British High Commission in Singapore cited the possible impact of a warmer Earth on the Philippines.

Pearson cited the Hadley Center study first released two years ago saying that higher temperatures would cause more severe droughts and, ironically, worse flooding due to rising sea levels in the region.

By end of century

The Hadley Center future climate model, based on projected global greenhouse emissions,  found that a rise in global temperatures of 4 degrees Celsius could hit “by the end of the century” but “will not uniformly affect all regions of the globe.”

In the Philippines, for instance, the temperature rise could trigger stronger, but not necessarily more, typhoons.

“As a result of a 4-degree-Celsius rise in the average global temperature, tropical cyclones could be more intense.  The potential rise in sea levels across Southeast Asia could further increase the country’s vulnerability to storm surges and other coast flooding,” the Hadley study said.

The study also found that those living in low-lying urban centers like the capital cities of Manila, Jakarta and Ho Chi Minh could be particularly vulnerable to flooding because of sea-level rise.

Residents of densely populated cities like Manila, Jakarta and Bangkok may also be more vulnerable to diseases, including heat-related and mosquito-borne illnesses like malaria and dengue.

Warmer waters could also compromise marine resources and affect the livelihood of fisherfolk in coastal parts of the Philippines, Indonesia, Malaysia, Thailand and Cambodia.

“I think the vulnerability is sort of at the human security level for somewhere like the Philippines,” Pearson said. “You are going to see very important sectors of the community affected by climate change.”

Pearson said the depletion of fish stocks and rice yield would cut the income of certain communities.

Francisco Lara Jr., International Alert country director, cited an incident at Liguasan Marsh in Maguindanao where rising water levels created a group of “climate migrants” to a nearby community some two years ago.

“The case in Liguasan is a case of  how an environmental occurrence of rising waters—climate change could be one factor—could lead people to leave their communities and enter new communities, therefore resulting in competition over scarce resources,” Lara said.

“Climate change reinforces tensions but can also create new tensions, especially when there is a demand for resources,” he added.

The impact of climate change could also be more pronounced in communities already affected by conflict.

“People who will suffer most are [in areas] where the impacts are strong and they don’t have the money to cope with it,” Pearson said. “So the more marginal members of society, that includes people displaced by conflict, will fall into the category of those who will suffer most because they won’t have the money to put in place adaptation measures to cope with climate change.”

Pearson said any response, in both adaptation and mitigation of climate-change impact, would require a multisectoral approach, as the issue is much more than just an environmental concern.

“We think if you need to tackle climate change properly, you need a cross-society approach, a cross-government approach, with most agencies thinking about climate change. It doesn’t mean it has to be the top priority but it does mean they have to think about the climate change aspects of the work that they do,” Pearson said.