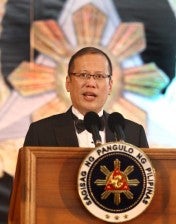 Except for the weather, President Benigno Aquino III said Thursday night that his nearly two-year-old administration was able to institute “profound change” in almost every sector, especially in doing business in the Philippines.

Speaking at the 17th anniversary of the Philippine Economic Zone Authority (Peza) and its Investors’ Recognition Night at  World Trade Center in Pasay City, the President called on investors at the special economic zone to expand their businesses here, as the investment climate in the country has never been better.

“The red tape that has for so long encumbered your operations has now been turned into a red carpet,” the President said. “And beneath all these is the firm bedrock that has become the calling card of my administration: No under-the-table deals. No graft, no corruption. Only hard work, service-oriented governance and a level playing field for all who have come to invest.”

Disclosing that the Peza on his watch and that of its director general Lilia de Lima has been able to generate P465 billion in investments in less than two years, Mr. Aquino said this spike in investments was “an indication of investors’ newfound confidence in the Philippines.”

He said the amount of investments was 23 percent of total investments in Peza over its 17 years of existence. He profusely thanked De Lima for a job “well done.”

“We have restored the idea of public service and accountability in governance; investors have responded with renewed confidence in our country’s prospects and, most importantly, our people have begun to believe that a better future awaits them,” the President said, adding in jest that “perhaps the only thing that has not been possible for us to change is the weather.”

Mr. Aquino urged the Peza investors to expand their operations in the Philippines, thanking them not only for giving Filipinos jobs but also training them to be skilled workers. For each job the investors generate, he said, another five jobs are indirectly created, and for this the government is taking every measure “to ensure that your stay here does indeed realize your expectations.”

Mr. Aquino stressed that the Peza has become more than a one-stop shop for investors; it is now also a “nonstop shop.”