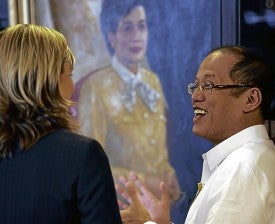 LIVE FROM MALACAÑANG President Aquino gestures during his interview by CNN’s Anna Coren at the Quezon Room in Malacañang on Thursday. MALACAÑANG PHOTO

President Benigno Aquino III’s family said Thursday it would cooperate with the government in the immediate distribution of its sprawling Hacienda Luisita to its workers as a “glowing legacy” of his late mother, democracy icon Corazon Aquino.

“The Cojuangco family expresses its full confidence that the Supreme Court decision regarding the fate of Hacienda Luisita is a just resolution for all parties concerned,” said Antonio Ligon, hacienda counsel and spokesperson.

“Now that the high court maintains that land distribution is the only resolution, the Cojuangco family guarantees its full cooperation in the expeditious completion of this process and put all other issues to rest,” he said.

While the family had sought a reconsideration of the high tribunal’s Nov. 22, 2011, ruling, Ligon said the court’s final decision on the decades-old dispute was “a verdict the Cojuangco family embraces.”

“(This) should be a glowing legacy for the late former President Corazon Cojuangco Aquino,” he said.

“It cannot be argued that Mrs. Aquino made decisive moves to place Hacienda Luisita in the 1980s under the Comprehensive Agrarian Reform Program although the preference of farmer-beneficiaries for stock distribution option (SDO) prevailed in at least three referendums over land distribution.”

However, he said that  “there is a formula in the law that has to be applied” in determining the “just compensation” for the owners of farmlands covered by the government’s agrarian reform program.

“We will await the processes in compliance with the determination of just compensation provided for in the law,” Ligon said, referring to the steps which the Department of Agrarian Reform and the Land Bank of the Philippines would take to decide on land valuation.

“We have always believed that the purpose of the law is ultimate justice and equal rule for everyone. The application of the law in this case is no exception.”

Malacañang has so far remained silent on Tuesday’s ruling by the Supreme Court affirming its unanimous decision dismantling the 4,915-hectare sugar plantation, dismissing a bid by the family to secure P5 billion (P1 million per hectare) as compensation and setting 1989 land prices (as low as P40,000 per hectare) as basis of its valuation.

Representatives of the 6,200 beneficiaries have urged Mr.  Aquino, who had divested himself of his holdings in the estate, to mobilize assistance for the workers during a difficult transition period to allow them to become self-sufficient farmer-cultivators.

“There are instructions to us not to comment on something we have not seen,” Lacierda told reporters, referring to a copy of the court resolution Tuesday.

“We will implement the law,” Lacierda said, pointing out that De los Reyes had issued guidelines to fast-track the distribution of the hacienda to its beneficiaries in response to Mr. Aquino’s directives.

Lacierda dismissed concerns by Chief Justice Renato Corona that he expected Mr. Aquino would get back at him for the setback the court had dealt on his family.

He said Corona should be “concerned about the impeachment court rather than worrying about any act or perceived or illusion acts of vengeance against him.”

“The government is not in that business. We’re in the business of reform and part of the reform process is reforming as well the judiciary,” Lacierda said.

“Corona should be concerned about his commitment to explain point-by-point the amount in his SALN (statement of assets, liabilities and net worth), the properties, the cash that were unreported in his SALN rather than go and accuse the President of any perceived action of vendetta against him.”

Officials of the Catholic Bishops’ Conference of the Philippines (CBCP) hailed the court ruling.

“We are calling on President Aquino to ensure the prompt distribution of the land,” said Manila Auxiliary Bishop Broderick Pabillo, chair of the CBCP’s National Secretariat for Social Action.

Pabillo challenged the President to set aside personal interests and ensure that his government immediately process the identification of farmer-beneficiaries and provide a budget for support services.

“President Aquino has the golden opportunity to seriously implement [land reform] in the country and become great in the eyes of the farmers. I hope he would take seriously the decision of the high court and that he would be able to genuinely use his power to help the poor,” said Pabillo over Church-run Radio Veritas on Wednesday.

CBCP President Cebu Archbishop Jose Palma said, “I hope the land will eventually be distributed to the farmers and so we can show that  in our country, we can be witnesses to the sharing of justice and giving the farmers their rights.”

Caloocan Bishop Deogracias Iñiguez said it was the duty of the President to uphold the spirit of the law for the poor farmers. “My call to President Aquino is to really look after the welfare of our farmers because it’s his responsibility as the leader of the country,” said Iñiguez. With reports from Christine O. Avendaño and Jocelyn R. Uy