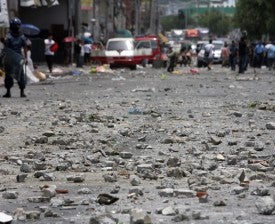 DEMOLITION TURNS VIOLENT Stones and broken cement blocks are scattered on the road in Silverio Compound, Sucat, Parañaque City, on Monday, April 23, 2012, as a house-demolition operation in a squatters’ neighbourhood turned violent with police using tear gas on residents who hurled rocks and other objects at them. At least one resident was killed and 40 others were injured. INQUIRER PHOTO/NIÑO JESUS ORBETA

Sucat road, Philippines—One of the busiest thoroughfares in Parañaque City turned into a battle zone Monday as policemen clashed with residents of Silverio Compound who were fighting a court order for the demolition of dozens of stalls at a flea market.

For more than an hour, residents hurled huge chunks of rocks, molotov cocktails and other projectiles at dozens of riot policemen, some of whom replied with gunfire and tear gas canisters or by hitting the protesters with batons.

Other residents defaced police trucks and vans and tried to set them on fire.

After the chaotic confrontation, one of the compound dwellers was found dead, lying on the street with a gunshot wound in the head, while at least 39 other people, four of them policemen, were injured. Two residents, both minors, were allegedly treated for gunshot wounds.

The lone casualty was identified as Arnel Leonor, 21, a resident of the sprawling 9.7-hectare property occupied by about 25,000 poor families.

The incident prompted Interior Secretary Jesse to order an investigation into the bloody showdown between police officers and rioters.

He also directed Southern Police District (SPD) director Chief Superintendent Benito Estipona to conduct an in-depth probe into Leonor’s death to determine the type of gun and bullet which killed him.

Robredo said that Estipona should likewise determine whether the gun used belonged to riot police units assigned in the area or the rioters. He also directed the SPD to conduct a probe of police officers who were seen on television hitting residents for possible human rights violations.

Shiela Bernal, one of the community leaders in the area, said thousands of residents flocked to the entrance of the compound as early as 6 a.m. yesterday, expecting government officials to implement a demolition order issued by Parañaque Regional Trial Court Branch 195 presiding Judge Aida Estrella Macapagal earlier this year.

“The residents formed a human barricade in front of the only entrance to the compound on Sucat Road to prevent the authorities from enforcing the demolition order,” Bernal said in a telephone interview.

As the residents assembled, some set tires and firecrackers alight, forcing traffic to grind to a halt. A number of trucks filled with policemen from the SPD arrived to secure the area.

There was no confrontation until about 10 a.m. when community leaders were negotiating with a court sheriff and government officials led by Rep. Edwin Olivarez.

“Militant groups numbering about 1,500 suddenly broke ranks and assaulted police ranks located some 100 meters away. Stones, molotov cocktails, bottles and pillboxes were thrown at the police. They even attempted to burn police cars and fire trucks,”

“After minutes of attack, our elements charged back under the cover of tear gas. By 11:30 a.m., we recovered Sucat Road. Four of our personnel were injured and 30 persons were arrested,” she added.

However, Bernal disputed this, saying that the police had opened fire upon the protesters and that the residents had retaliated by pelting them with rocks and other projectiles, including plastic bags filled with human waste or vinegar and chili peppers.

When gunfire broke out, residents scampered away from the scene in all directions, but most of them opted to run back to their homes to protect their houses from being torn down, Bernal said.

The police eventually quelled the violence and started the demolition at around noon. Dozens of stalls and structures at the flea market at the mouth of the compound were dismantled.

When vehicles were allowed back on the road at around 1 p.m. yesterday, police were still conducting cleanup operations, as many pieces of rocks, shards of broken glass and other waste were still strewn along Sucat Road.

In a press conference, Parañaque Mayor Florencio Bernabe Jr. defended the demolition, saying that Silverio Compound was a government-owned property.

“The residents should understand that we will not demolish their houses, but only the flea market in the middle of the street leading into the compound. The market prevents immediate response in case any emergency occurs inside the compound,” Bernabe said.

He also denied reports that a condominium would be built on the property, saying they planned to construct medium-rise buildings where the residents would be relocated.

“We have a housing program there with the National Housing Authority to build medium rise buildings in that location which is also for them. They need not worry because they will be relocated to a different area on the lot while the apartments are being built,” Bernabe said.

He claimed that the residents were being influenced by what he called “professional squatters” who were going around, telling the other dwellers that they would be displaced by the government project.

Militant groups immediately criticized the police and the Parañaque government for the violent demolition as they pointed to Henry Sy Jr., chair of mall operator SM Prime Holdings, Inc., as being behind the move.

“Henry Sy and his cabals in his big corporate mafia are not only responsible for environmental degradation in Baguio but also for the rights violations which occurred today (Monday) during the demolition in Parañaque and the utter greed that comes with their forced eviction of residents who have legitimate claim to their homes,” rights group Karapatan said.

However, SM Prime denied this.

“SM group denies it owns or is acquiring the Silverio Compound, situated on Sucat Road in Parañaque, and is in no way involved in the demolition of informal settlers in the area,” it said in a statement.

Bernal and the Silverio residents have claimed that the lot was effectively given to them in 2003 by virtue of an ordinance.

The expropriation proceedings took a turn for the worse last year after the city government filed a petition for the demolition of the houses in the area, citing the need for medium-rise buildings where the residents would be relocated.

The court granted the petition earlier this month, despite a protracted legal battle because of opposition from the residents who were given until April 23 to move out.

As for the residents, Bernal said they would continue to fight against the city administration’s plans, especially as the demolition order was flawed. They should have been given 30 days notice, not 10 days as written in the order they received only earlier this month, she added.

“We will question this in court. We cannot just sit here and watch as our houses are being demolished. We must fight,” Bernal said.

Meanwhile, a human rights official said that rather than restore peace and order, the police personnel became part of the disorder.

Human rights chair Loretta Rosales criticized the police officers who figured in a violent confrontation with Parañaque residents as she lambasted their use of guns as well as the physical harm that some of them inflicted on the arrested persons.

Rosales said that even if it were the residents who sparked the melee, the police should not have aggravated the heated atmosphere and done what they could to restore the peace.

Police personnel are state agents mandated to protect the people, she added.