Where Mary watches over as nature feeds the soul 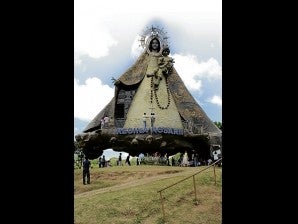 A 71-FOOT HIGH MADONNA AND CHILD image offers solace to the faithful and stands guard against follies that may hurt the environment. PHOTO BY PAOLO V. PAPA/CONTRIBUTOR

On the foothills of the longest mountain range in the Philippines, the Sierra Madre, is nestled a 13.5-hectare ecological sanctuary for spiritual worship and nurturing as envisioned by the Dominican sisters of the Regina Rosarii (Queen of the Rosary in Latin)—the Regina Rosarii Institute for Contemplation in Asia, or Regina Rica.

It is impossible to miss the site. The sanctuary is located on  Sitio Aguho Street in Barangay Sampaloc, Tanay, Rizal province, right after Camp Capinpin and the sprawling estate of former President Joseph Estrada.

A 71-foot high statue of Mary, Queen of the Rosary, carrying the infant Christ, beckons to one and all, guarding some 10,000 mahogany trees and several other kinds of trees and plant varieties, organic gardens and a collection of birds, monkeys, ducks, chicken, geese, hamsters, rabbits, carabaos and horses.

Visitors who stream in daily gladly abide by the reverent discipline of the dress code and subdued conversation as they immerse themselves in prayer under the protective mantle of Mary’s statue, or as they go through the labyrinths of the forest and as they partake of vegetarian food from the organic gardens. They also follow to the letter instructions for waste segregation, using the labeled bins for biodegradeable and nonbiodegradeable wastes.

Several signs announce that the area is a free-plastic zone. The sisters and staff are a wonderful example of volunteers or environmental warriors guarding this environmental haven. What highlights one’s visit is respect for the sanctuary, a deeper realization of one’s self and being and an appreciation of God’s grandeur, in the vision of the English poet and Jesuit priest Gerard Manley Hopkins.

There is no entrance fee to Regina Rica.  Picnic areas are available for those who choose to bring their own food, but no plastics please. For those who prefer to leave their picnic hampers behind, a canteen  offers vegetarian food.

There is certainly a need for prayers, not only for human but for divine intervention.

Near the site, the once lush forests and plant and wildlife wealth of the city of Antipolo and the towns of  Montalban, San Mateo and Teresa are almost gone, as many of the hills have turned not only brown from denudation but have become like Lego blocks, gradually being chipped off till they are totally quarried to the ground turned parking spaces for passenger jeeps or commercial compounds. Worse, they have become deep and wide holes turned into dump sites. 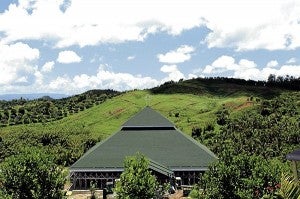 THE CHAPEL, currently under construction, is nestled amid some 10,000 mahogany trees. PHOTO BY PAOLO V. PAPA/CONTRIBUTOR

Rivers, once clear and clean and teeming with fish, have also become toxic with leachate from the garbage dumps and effluents from establishments and homes. Other rivers have been covered by a chaotic sprouting of miscellaneous structures for purposes not really different from high-end development projects with so-called “mixed use” setups.

Not too far away, more commercial interests are fast hacking away at pockets of trees that somehow still help add to the already much depleted supply of oxygen in the metropolis.

Concerned residents of neighboring Quezon City, for example, fear that the establishment of the so-called “central business district” will soon clear the remaining natural shelters of trees in the Parks and Wildlife reserve, the Manila Seedling Bank, the nursery of the Department of Environment and Natural Resources, the trees surrounding Children’s Medical Center and the Lung Center of the Philippines.

Using the Sierra Madre as her podium, Mary must be reminding those who profess to govern this land of their duty as leaders of what is touted as the center of Christianity in Asia: To abide by the faith they profess, carry out the duties and responsibilities they have sworn to do, and uphold the provisions of the 1987 Constitution of this land so blessed, as found in Section 16 under State Policies: “The State shall protect and advance the right of the people to a balanced and healthful ecology in accord with the rhythm and harmony of nature.”

National and local leaders are advised to go to Regina Rica as part of their reflection even long after the Holy Week is over. We ask them, at least, to help prevent any more of the already threatening intrusions to the site, such as the presence of commercial hog farms and the sale of land rights, including mountain areas that are “titled”  and sold to influential and moneyed individuals and groups, to be used as private resorts or rest houses.

Aren’t these supposed to be protected areas? How did this come about?  There are reports that an influential person will soon put up a local Hollywood in the area. Meanwhile, Daranak Falls is now far from the enchanting hideaway it used to be years back.

Environment Secretary Ramon Paje, in a recent conversation, said the national and local governments should prevent the sale of government lands because as private properties, they  would be easily open for commercial use. “Let the trees in the parks and forests stay. There should be no-build zones in these areas,” he added.

It’s about time government passed the long-pending national land use law. And hopefully, the hills of Tanay—and Regina Rica will continue to live on not only in legend, photographs and in stories of lovers of nature and the environment.

The authors are co-founders of Bangon Kalikasan Movement and can be reached at [email protected] For more information on Regina Rica, call 401-2036, 958-3878. Or visit their website for more details, pictures and updates at www.reginarica.org.

Read Next
Manila seawall rebuilt at P94M
EDITORS' PICK
In Borongan, nuns play hoops (not mahjong)
PH resumes talks with China on Chinese-funded transport projects
Powered by style, innovation and passion
Why Tagle is a leading papal contender
House energy committee chair Arroyo bats for cheap electricity
A laptop that maximizes your WiFi so you can maximize your productivity
MOST READ
Imee Marcos bares illegal importation of white onions
Why Tagle is a leading papal contender
SRA officials should resign after ‘illegal sugar order’ – Zubiri
My neighbor FVR: From soldier to president
Don't miss out on the latest news and information.