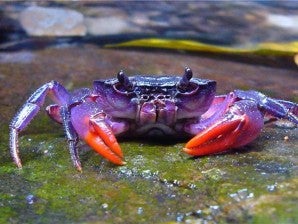 Insulamon palawanense and the insulamon magnum are two of the four new species of brightly colored river crabs recently discovered by scientists in the inland waters of Palawan. Contributed photo by Alpha Galileo website

MANILA, Philippines—Four new species of freshwater crab, bright purple in color, have been discovered in the biologically diverse Philippines, according to a scientific paper.

The tiny crustaceans were found in streams in remote areas of the Palawan island group, according to a team led by Hendrik Freitag, of Germany’s Senckenberg Museum of Zoology.

“They are semi-aquatic and hide in burrows at the stream bank, which are usually found under boulders and roots,” said his paper published in the latest edition of the National University of Singapore’s Raffles Bulletin of Zoology.

Their eggs hatch directly into juvenile crabs, and the creatures emerge at night to forage under water, Freitag added.

Photographs of the adult crabs published on the website of Dresden-based Senckenberg museum showed them with a purple carapace, and with claws and legs tipped red.

Scientists began extensive investigations of similar freshwater crabs in the area in the late 1980s, with one new species being found — the Insulamon unicorn — Freitag’s paper said.

More field work in the noughties led Freitag to conclude there were four other unique species.

“Based on available new material, a total of five species are recognized… four of which are new to science,” Freitag said.

The four slightly differ from the first find, and from each other, in the shapes of their body shells, legs, and sex organs.

Conservation International lists the Philippines as one of 17 countries that harbors most of Earth’s plant and animal life.