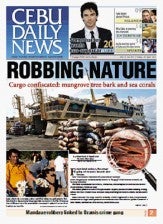 From land and sea, the smuggling of nature’s bounty continues.

Navy men seized a boat load of 1,000 sacks of tree bark from mangroves or tanbarks locally known as “tungog,” which arrived in Pier 1, Cebu City, yesterday.

The bark was loaded in Tawi-Tawi , Mindanao, and consigned to a certain Paul Bercina of Paknaan, Mandaue City.

The forest product is used in the production of paint, beads and food coloring among others and has a market value of P280 a kilo, according to the Naval Forces Central Command.

Documents for the cargo said the tanbarks, which weighed 51.4 tons, was previously confiscated as illegal forest products in Mindanao and then sold in a public auction to a lone bidder, Erickson D. Kho of Sulu, for only P25,520.

Edward Pamploma of the Regional Anti-illegal Logging Task Force said that when they checked with counterparts in Tawi-Tawi, they found out that no public bidding actually took place.

He said the task force will hold the shipment for 72 hours to investigate further.

Mangroves, which grow in the shoreline, are considered forests of the sea that serve as fish nurseries, coastal protection against storm surges and play an essential role in marine biodiversity.

Meanwhile, around 800 sea corals ready for shipment were seized by police in a vacant lot in barangay Punta Engaño, Lapu-Lapu City.

Two women hired to pack the corals in boxes were arrested but the owner remained unidentified.

Corals of five varieties were bound for export to China and were estimated to be worth P200,000, said SPO1 Jomar Ybañez, head of Task Force Kalikasan.

A phone tip from an unnamed caller who said two women were seen packing corals led police to sitio Buot.

Punta Engaño in Mactan Island is a known source of illegally gathered corals and a transshipment point where the corals are dried, processed and packed for other destinations.

The women said they were hired by three men for P80 a day to pack the corals with newspaper sheets in a carton. They started packing at 9 a.m. and the corals were already on site when they arrived, they said.

Charges will be filed against Irenea Pagobo, 47, and Cherry Mae Inoc, 20, both residents of sitio Malingin in Punta Engano.

The penalty for illegal possession of rare sea corals is 12 to 20 years in jail with a P120,000 fine if they are found guilty under Republic Act 8550.

The corals were turned over to the City Environment and Natural Resources in Lapu-Lapu City.

In the tanbark confiscation, the Navy was alerted last week that mangrove barks were loaded on a motor launch boat M.L. Amina in Tawi-Tawi, Mindanao, going heading to Cebu but had engine trouble.

Navy and Philippine Coast Guard (PCG) personnel went looking for the boat and found it docked in Dumaguete City where fishing boats had towed it.

A Certificate of Minor Forest Products Origin was issued by the Department of Environment and Natural Resources (DENR) in the Autonomous Region in Muslim Mindanao (ARMM).

The shipper was identified as Erickson D. Kho of Sulu and the cargo was consigned to Paul Bercina of barangay Paknaan, Mandaue City.

The sacks were transferred to another ship M.V. Filipinas of Cokaliong Shipping and transported to Cebu yesterday.

Based on the documents, the tanbarks were previously confiscated and forfeited in favor of the government. An auction was held and Kho was the lone bidder. He paid P25,870 for the whole lot.

In a separate phone interview, Maximo O. Dichoso, executive director of DENR-7, said he issued a “verbal” hold order of the shipment yesterday.

He said DENR counterparts in ARMM confirmed that they had issued documents for the tanbarks.

“They (DENR-ARMM) decided to dispose of that through public bidding and they shipped them out for the market,” Dichoso said.

But Dichoso said it was not his office’s duty to investigate whether a bidding took place or not.

“It has been validated and confirmed by the source,” Dichoso said.

Dichoso said the tanbarks will be released as soon as he reviews the documents and cargo with Regional Anti-illegal Logging Task Force.

A hold order for the tanbarks was issued by the National Anti-illegal Logging Task Force yesterday afternoon.

The anti-illegal logging task force stopped the trucks from delivering the tanbarks to Mandaue City.

Pamplona said the owner would have to show a Certificate to Transport Forest Products from Cenro first.

“It will not be released to the consignee unless we have verified that the documents are genuine and a bidding really took place,” Pamplona told CDN in Cebuano.

Pamplona said the task force noticed a discrepancy in the Certificate of Minor Forest Products Origin.

“The series of numbers are different,” Pamplona said.

Under an Executive Order, President Benigno Aquino III declared a moratorium on the cutting and harvesting of timber in the national and residual forests, and created the anti-illegal logging task force.

The sacks are being held under the custody of CENRO at Pier 1 in Cebu City.