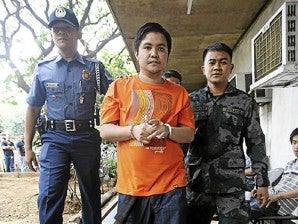 CITY OF MALOLOS—In a decision that was held up by the Palace as a model of “impartiality and swiftness,” Raymond Dominguez, one of the suspected leaders of a car theft gang operating in Metro Manila and Central Luzon, was convicted on Tuesday in a car theft case and sentenced from 17 to 30 years in jail.

“Judge Wilfredo Nieves handed down the decision with impartiality and swiftness, taking only a year and four months to resolve the case,” presidential spokesperson Edwin Lacierda said in a statement.

“We congratulate Public Prosecutor Maureen Abad Moises for her capable handling of the case. Its resolution proves that with honest and committed public servants, our judicial system can work effectively toward fulfilling its duties to the public,” Lacierda said.

The case was filed by Dante Escoto, driver of a Toyota Fortuner belonging to the owner of Crocodile Tapes and Co.  Escoto said Dominguez and two others took his employer’s car while it was parked along MacArthur Highway in Marilao town on Jan. 14, 2010.

Dominguez has more than 10 other car theft cases pending against him in various courts in Bulacan, Pampanga and Metro Manila.

One other case involved the murder of car dealer Venson Evangelista, whose charred remains were found in Nueva Ecija on Jan. 14 last year a day after he disappeared in Quezon City. Evangelista was last seen with two people who had expressed interest in buying his vehicle.

Dominguez and his brother Roger are suspected leaders of the Dominguez car theft syndicate.

While convicting Dominguez of car theft,  Nieves, of Regional Trial Court Branch 84, dismissed the robbery charge against him, saying Escoto’s testimony failed to establish that Dominguez also took a laptop computer, wrist watch, gold bracelet, necklace and P4,000 cash that were missing from the car.

Nieves said the evidence in the robbery case was “wanting and insufficient” in view of Escoto’s “vacillating identification” of the accused.

Court records showed that Escoto parked the car in front of a vehicle parts store in Barangay Saog, Marilao. While Escoto was inquiring from the store owner about the prices of car mats, Dominguez and his companions arrived and approached Escoto’s car.

According to the records, Dominguez held Escoto while his companions boarded the car. Dominguez later pushed Escoto away and boarded the vehicle that sped toward Meycauayan City.

Store owner Faustino Casilang testified that he witnessed the incident, and identified Dominguez from a police file.

“No proof was elicited by the defense that Casilang was motivated by an evil motive or malicious intention to unduly implicate Dominguez as one of the perpetrators of the (car theft) in order to show that the former is a biased and an unreliable witness,” Nieves said.

He dismissed the defense claim that Dominguez was not in Bulacan during the commission of crime.

Car dealer Arsenio Evangelista said he was “happy” with Dominguez’s conviction and that he was confident the courts would also convict the Dominguez brothers for the death of his son, Venson.

“No words can describe my feelings as a victim of a heinous crime… I am happy, and so are the other victims of carjacking groups,” Evangelista said.

Venson was shot several times and burned beyond recognition after the Toyota Land Cruiser he was selling was forcibly taken from him by men posing as customers on Jan. 13, 2011.

The fake customers turned out to be members of the Dominguez theft gang, according to investigators.

“I hope this will serve as a warning to other carjacking groups. I hope that the Dominguez brothers will be convicted in my son’s case as well,” Evangelista said, adding he was “95 percent” confident of winning a conviction for the death of his son. With reports from Christine O. Avendaño and Julie M. Aurelio