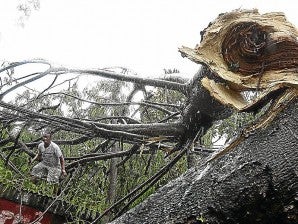 TWISTED. A man starts cutting branches from a tree uprooted by a freak twister that hit parts of Quezon City on Friday. Tropical Storm “Falcon” continued to pound Metro Manila and the rest of Luzon with heavy rains, triggering flash floods and forcing some 50,000 to flee their homes. Falcon is expected to exit tomorrow. NIÑO JESUS ORBETA

As though the relentless rains brought by Tropical Storm “Falcon” were not enough, twisters (ipo-ipo) on Friday hit Quezon City and a town in Iloilo, destroying and damaging public and private property, including the house of industrialist Eduardo “Danding” Cojuangco.

A weather forecaster at the Philippine Atmospheric, Geophysical and Astronomical Services Administration (Pagasa), said eyewitness accounts and an on-site inspection would be critical in determining the nature of the twister.

But whatever it was that tore off roofs and uprooted trees in New Manila, Kamuning and Kamias in Quezon City, Aldczar Aurelio was definite that Falcon and the southwest monsoon caused powerful winds to spin around the area.

Rains 14 times the daily average recorded every June poured within 24 hours because of the southwest monsoon, Aurelio said.

Some 147.3 millimeters of rain fell at the Pagasa rain observatory, the Science Garden in Quezon City, from 8 a.m. on Thursday to 8 a.m. yesterday.

“The rainfall was much more compared to the normal rainfall every June in Quezon City, which is 311 mm every month, or 10 mm per day. In one day, we had 147.3 mm,” Aurelio said.

Aurelio said the heavy rains over Metro Manila, much of Luzon and western Visayas in the last few days were brought by the southwest monsoon, which Pagasa had been warning about since Tuesday.

Falcon retained its strength as it moved faster on its way out of the Philippines, Pagasa said in a 5 p.m. update on Friday.

The storm moved 22 kilometers per hour north-northwest, faster than its 19-kph speed Friday morning, as it spun toward Japan. It is expected to be some 710 km north-northeast of Basco, Batanes, by Sunday afternoon.

Storm Signal No. 1 remains hoisted over the Calayan, Babuyan and Batanes island groups.

The weather is expected to improve across the country by Sunday, when Falcon would have moved out of the Philippine area of responsibility, Aurelio said.

But another low-pressure area (LPA) is brewing over east of Luzon and over the Pacific Ocean, and is likely to merge with Falcon due to its strong pull on its track northward, Aurelio said.

Falcon swallowed a similar weather system over the Pacific Ocean on Wednesday.

“We expect that Falcon will become a typhoon on its way out. Falcon is strong, so nothing will happen to the LPA but dissolve and be absorbed by Falcon,” Aurelio said.

One of the houses in Quezon City that sustained the biggest damage from the twister is that owned by Danding Cojuangco, according to Elmo San Diego, the head of Quezon City’s Department of Public Safety and Order.

The twister ripped off the roofs of 40 houses including Cojuangco’s in a wealthy area in New Manila, as well as a number of houses in Kamuning and Kamias before it disappeared, said San Diego, a retired chief superintendent.

San Diego said the families rendered homeless were welcome to stay in the evacuation area if they wanted.

In Kamuning, Carla Santos described the twister as “a huge dark gray cloud that toppled, ripped and hurled things that got in its way.”

Santos told the Philippine Daily Inquirer that she watched the twister from the covered entrance of the Quezon City Jail at shortly past noon.

“We were standing outside the jail and waiting for our turn to go inside and visit my husband when we heard a howling sound,” she said. “When I turned to look, I saw the circling strong wind and saw a huge tree uprooted and a roof of a house torn off and sent flying toward Edsa.”

Santos said the onslaught “seemed like forever, but I understand it lasted for only about two minutes.”

A satellite office of the city welfare office beside Bernardo Park and in front of the city jail was cut in half when the uprooted tree fell on one of its rooms.

“I heard a loud thud from above me, and when I looked up, I saw the ceiling and the fluorescent light falling down on me. I crawled on the floor, then stood up, kicked the door and left the room as fast as I could,” Edielyn de Castro said.

A concrete wall beside the Kamuning police station collapsed damaging a number of parked vehicles.

Traffic in front of the station was halted because of the big tree that fell in the middle of the southbound lane of Edsa. Fortunately, no vehicle was passing when the twister toppled the tree, a police officer said.

No one was injured, Barotac Nuevo Mayor Hernani Biron said in a phone interview with the Inquirer in Iloilo City.

Biron said most of the destroyed and damaged houses were empty because the children were in school and their parents were at work.

The homeless families stayed with their relatives or in nearby schools. The municipal government has provided them food and other assistance.

NDRRMC executive director Benito Ramos said La Mesa Dam had started spilling excess water. He called for the evacuation of residents along the Tullahan River, particularly in Quezon City, and the other cities of Malabon, Caloocan and Valenzuela.

Other dams were approaching or were at critical levels, the NDRRMC said.

The NDRRMC said 33,429 families in 135 villages, five provinces and four regions had been affected by Falcon. On the other hand, 11,245 families have been evacuated, most of them in Albay.

In Metro Manila, a total of 7,111 residents, more than half of them in Marikina City, had been evacuated. Quezon City was second with fewer than 2,000 affected persons, the NDRRMC figures showed.

Floods were reported in Meycauayan City and the towns of Marilao and Calumpit in Bulacan and the City of San Fernando and eight towns in Pampanga.

Teams in Southern Luzon continued their search for 15 persons who went missing due to the foul weather.

Disaster authorities said the missing included 10 fishermen in Catanduanes, three fishermen in Camarines Norte, a woman in Albay, and a 3-year-old girl believed to have drowned in Laguna.

In a report to Governor Edgardo Tallado, Palacio said the three men went out to the sea on June 21 and had not been heard from since.

Members of the police, Army and Coast Guard continued to scour the waters off the towns of Virac, Bato and San Miguel in Catanduanes for the 10 other fishermen, who were reported missing on Wednesday morning, said Nieva Santelices, action officer of the Provincial Disaster Risk Reduction and Management Council.

One of the two search teams returned empty-handed yesterday afternoon, said Reymund Reginaldo, acting administrator of the Red Cross in the province.

Local disaster officials also continued the search for Rosa Belga, 54, of Barangay Basag, Ligao City, in Albay, who was swept away by raging waters.

Belga and her husband were crossing a river on the way to the city market at about 3 a.m. on Thursday. The husband was able to save himself.

In Laguna, rescuers have yet to find 3-year-old Angelica S. Recome of Golden City Subdivision, Sta. Rosa, who was believed to have drowned, said Vicky Torralba, public information officer of the Calabarzon Disaster Risk Reduction and Management Council.

A total of 28 domestic flights to various areas were canceled because of the bad weather.

As of 10 a.m. Friday, most of those canceled were Cebu Pacific flights from Manila to Caticlan and back.

The Manila International Airport Authority’s Media Affairs Division said the other carrier that canceled its flights was Seair. Of the affected flights, two were Seair flights bound for Basco.

In an advisory, Philippine Airlines said no domestic or international flight was canceled yesterday.

“PAL operations remain normal with some flights experiencing minor delays due to prevailing weather condition at airports in Manila and provincial stations,” the advisory read.

There were, however, slight delays in 17 international and 21 domestic flights, PAL said.