BORACAY ISLAND—Before the sun rose on Tuesday, the Ati tribe of Boracay Island occupied the land titled to their community in what they hope would be the end to decades of struggle to have a home in the world-famous resort. 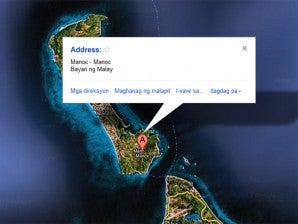 At least 60 tribe members, along with nuns and other supporters, prayed the rosary as they marched for more than a kilometer along the white beach from their community in Barangay Balabag to the 2.1- hectare lot in Barangay Manoc-Manoc awarded to them by the National Commission on Indigenous Peoples (NCIP).

The women tribe members continued praying around a makeshift altar where they placed an image of the Virgin Mary as the men built a bamboo fence around the lot.

“We are excited but at the same time afraid because we might be forcibly driven out from here. But we are taking the risk because this is for our children’s future,” Delsa Justo, chief of the Boracay Ati Tribe Organization (Bato), told the Inquirer.

Tension rose less than an hour after the occupation when several men later identified as caretakers of property claimant Rudi Banico told the tribe members to stop the occupation and the construction of fences. The men asked the Ati people to present a map covered by their title.

Nuns belonging to the Holy Rosary Parish Ati Mission and other supporters from nongovernment organizations and community leaders helped negotiate with the caretakers as they presented the CADT (Certificate of Ancestral Domain Title) for the lot.

On January 21, 2011, the NCIP had formally turned over to Bato the  CADT for the property bearing the organization’s name.

The beachfront land will be the new home to 40 Ati families or at least 200 tribe members. The CADT was issued on

Aug. 3, 2010, and registered with the Land Registration Authority in November last year.

But the commission has yet to issue a writ of possession to formally turn over the property to the tribe.

At least three claimants have contested the awarding of the CADT to the Ati tribe citing prior possession of the lot.

“Their occupation is illegal and they are denying me due process. They have no evidence to prove their right over their lot and all they have is ‘invented history,’” Banico told the Inquirer in a telephone interview.

He said the tribe should wait for the outcome of a pending petition for injunction he filed at the Kalibo Regional Trial Court Branch 5 against the NCIP.

“All they have is a title but they do not even have a map to show its boundaries,” he said.

Justo said they had been observing due process since they filed a petition for the issuance of the CADT on Feb. 23, 2000.

“But while we waited for the outcome of the process, the claimants are already constructing fences and other structures on our land. We have a right to do this because we have already been given the title,” she said.

The NCIP and anthropological studies have supported claims that the Atis were the earliest settlers on the island but were displaced and driven away, especially starting in the 1970s when tourists and investors started to descend on the island.

The Ati families have been living in a 1-hectare lot in Sitio Bulabog in Barangay Balabag but have been continuously threatened with eviction.

Tuguegarao Archbishop Sergio Utleg, chair of the Episcopal Commission on Indigenous Peoples (Ecip) of the Catholic Bishops’ Conference of the Philippines (CBCP), called for support for the Ati tribe.

“We call all non-IP faithful in Boracay Island to fully support our indigenous people in their struggle,” Utleg said in a statement.

Fr. Magloire Placer, the Boracay parish priest who celebrated Mass after the occupation, said the transfer of the Ati tribe to their land was a “realization of a dream through a long struggle.”

“If we can open Boracay to foreign tourists and investors, why can’t we give land to the earliest settlers of the island?” he said.