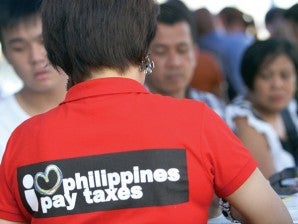 ANNUAL CRUSH Taxpayers, who waited till the last day, jam a Bureau of Internal Revenue office in Intramuros, Manila, on Monday to file their returns and avoid penalties. NIÑO JESUS ORBETA

The Bureau of Internal Revenue (BIR) said the April 16 deadline for the filing of income tax returns (ITRs) will not be extended and those who failed to beat the cutoff date face stiff penalties.

Penalties for late filing include a 20-percent interest per annum, a 25-percent surcharge and a compromise fee dependent on one’s tax due.

The BIR had been urging the public to file their ITRs and pay their taxes on time, hoping to generate significant tax revenues early in the year given its task to fund bulk of the government’s higher expenditure requirements for 2012.

There is now an option for taxpayers to file tax returns and pay taxes online.

The BIR offices remained open even after the previously announced 5 p.m. closing time on Monday.

“It has always been this way. People still choose the last day to file their ITRs,” said revenue officer Benjamin Casals.

Casals noted that the new ITR forms caused a bit of confusion among taxpayers although tax officers were on hand for those who need assistance.

“The interactive [version] of the forms are made available so people may fill it up on the computer before printing so they won’t have to get in line to acquire forms in their respective regional branches anymore,” an information officer said.

Taxpayers may also pay taxes through accredited agent banks, a list of which is posted on the website.

The BIR is tasked to collect P1.066 trillion in taxes this year to help fund the government’s expenditure programs.  With a report from Julie M. Aurelio and Daphne Magtubo, trainee