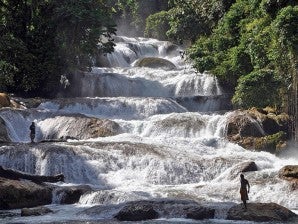 WATERFALL WONDER A power crisis seems to be remotely felt in this once secluded corner of Mindanao. An overload of at least 84 waterfalls cascading through a forested area is found at the Aliwagwag Falls in Cateel town in Davao Oriental. KARL SUMBELING / INQUIRER MINDANAO

Consumers and business and political leaders in Mindanao are disappointed with President Benigno Aquino III’s response to the power crisis on the island, saying the privatization of power barges was the root cause of their woes.

Two Catholic bishops on the island were neither pleased with Mr. Aquino’s statement that Mindanao would have to shoulder higher power costs as part of the solution to the island’s electricity-supply problem.

“If only the government has not sold the power barges to Therma Marine Inc. (TMI), there would have been no shortage of power in Mindanao right now,” said Dr. Melchie Ambalong, chair of the Mindanao Commission on Women.

Ambalong pointed out that the power barges, which used to serve as the “spare tire” of the Agus-Pulangi hydropower plants, could have supplied some 200 megawatts, enough to cover the power shortfall. She was referring to PB 117 in Agusan del Norte and PB 118 in Compostela Valley, which the government sold to the Aboitiz-owned TMI in 2010.

She added that despite a provision in the Energy and Power Industry Reform Act (Epira), which allows the Power Sector Asset and Liabilities Management (PSALM) coop to allocate an amount to rehabilitate the Agus-Pulangi hydropower complex, the government had left the hydropower plants to deteriorate. As a result, their installed capacity was reduced by 254 MW.

At the Mindanao Power Summit on Friday, Mr. Aquino warned of more outages if the Agus-Pulangi hydro complex remained exempt from privatization as provided by Epira.

With the growing population and increasing opportunities in the region, Mindanao’s dependence on hydroelectric power was not sustainable anymore, the President said.

Mr. Aquino said that due to the low supply of water, Mindanao could no longer rely on hydropower for more than half of its daily electricity consumption.

“Everything has its price. You have to pay a real price for a real service. There are only two choices: pay a little more for energy, or live with the rotating brownouts,” he said.

Energy Secretary Jose Rene Almendras even blamed the power crisis on the Agus-Pulangi hydro complex’s exemption from privatization. He said it was “difficult for any investor to put up a nonhydropower plant” because they would be competing with the low-priced power generated by hydro facilities.

Almendras said the complex continued to deteriorate, generating only 646 MW instead of its 982 MW installed capacity. 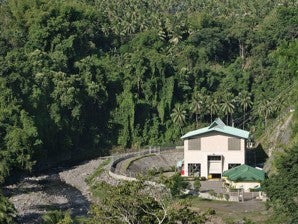 Ambalong said it appeared that the government had allowed the plants to deteriorate to allow the sale of the facilities at dirt cheap prices.

Her argument jibed with that of Ricardo Juliano, vice president for Mindanao of the Philippine Chamber of Commerce and Industry.

Juliano said that for Mindanao to maintain its competitive power rates, the government should keep implementing a hydro-based energy mix, with fossil fuel-fed plants serving only as ancillary reserve.

He noted that this approach was successfully being done in Brazil, which has one of the lowest power prices in the world.

“It has been a practice of the business sector to rehabilitate the facility before its sale so that it can fetch a higher price,” Mindanao Business Council chair Vicente Lao also said in a separate presentation.

Davao City Councilor Leah Librado said Friday’s summit served merely as “theatrics” to make it appear that the people in Mindanao were heard, even as the government would push through with the bidding of the remaining power barges 101, 102, 103 and 104 on May 16.

Amreco earlier said that buying power from privately owned power barges would mean an increase in the consumers’ electric bills.

Mr. Aquino said Mindanao would need “a more diverse mix of energy sources” because hydro power was no longer reliable.

He could be referring to the 300-MW coal-fired plant that Aboitiz Power Corp. plans to erect in Davao City and the Alcantara-led Conal Holdings Corp.’s 200-MW project in Sarangani.

Almendras had served as treasurer for both Aboitiz & Co. and the Aboitiz Equity Ventures.

Marbel Bishop Dinualdo Gutierrez said it was unfair for the people of Mindanao to suffer the consequences of the government’s negligence and wrong policies that led to the power crisis.

“It’s not the fault of the people of Mindanao why the region is having a power crisis today,” said Gutierrez over Church-run Radio Veritas on Sunday.

“It’s the government to blame because of its neglect and wrong policies that tend to favor businessmen and private investors rather than looking after the welfare of its people,” the prelate said.

Apostolic Vicariate of Jolo Bishop Angelito Lampon echoed the same sentiments over Radio Veritas, saying that the government still had the option to propagate renewable energy in Mindanao, such as the use of hydropower plants.

“For now, we are forced to accept the reality of paying more but that also shows the neglect and the lack of insight on the part of the government,” Lampon said.

He said letting people pay for higher electricity cost would create more problems than provide a solution to the crisis.

Gutierrez and Lampon lamented that the power summit had failed in its aim to provide reasonable solutions to the region’s continuing power supply woes.

The bishops opposed the development of biomass and nuclear power plants to generate more power in Mindanao.

“It’s not a good idea to build a nuclear power plant because we have many fault lines in the country, particularly in Mindanao,” said Lampon. “One major earthquake and we will all be finished.”

Gutierrez urged the President to pray and seriously study and explore other alternatives to solve the power crisis in the region instead of placing the burden on the people.

Among the examples Gutierrez cited were the use of pineapple waste to generate electricity, an experiment initiated by Dole Philippines; and the use of solar units like those installed in the residence of priests in Palembang town in South Cotabato.