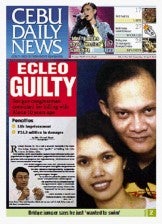 Ruben Ecleo Jr. was not around yesterday to hear the judge declare him “guilty” of killing his wife Alona in Cebu City.

The verdict capped nine years of a parricide trial and added pressure to capture the fugitive congressman of the lone district of Dinagat Island, Surigao del Norte, who was earlier convicted by the Sandiganbyan on graft charges.

“It is now the job of the police to arrest Ecleo,” said prosecutor Alfredo Sipalay.

He said they will ask President Benigno Aquino III to order a nationwide manhunt for Ecleo, who is the “supremo” of his own religious cult.

Alona Bacolod, a fourth year medical student, was strangled in the couple’s residence in sitio Banawa, barangay Guadalupe, Cebu City on Jan. 5, 2002. Her body was found three days later in a black garbage bag dumped down a ravine in Dalaguete town, south Cebu.

Ecleo is the supreme master of the Philippine Benevolent Missionaries Association (PBMA) which was founded by his father, a spiritual leader in the 1960s.

Ecleo was ordered to pay a little over P25,650,000 million in compensatory damages for killing his wife. The amount was based on what Alona would have earned had she graduated and became a doctor.

The court also ordered Ecleo to pay the five remaining siblings of Alona P400,000 in moral and exemplary damages, and P200,000 in attorney’s fees.

Ecleo has been in hiding since arrest warrants were issued by two courts.

The Sandiganbayan found him guilty of three counts of graft for overpayment of municipal buildings and one center owned by the PBMA, during his previous stint as mayor of San Jose, Dinagat Island in Zamboanga del Norte. He was sentenced to 31 years in jail.

Defense lawyer Orlando Salatandre said he would seek a reconsideration of the decision or go to the Court of Appeals.

“We have available remedies. It’s not over,” he told reporters.

“The identity of the victim was not clear. Who was that cadaver? Are they sure it was Alona? Had it been discussed thoroughly, it could have been the end of the journey. But as far as we’re concerned, it was not all taken up well,” said the lawyer.

He said forensic experts presented in trial said the corpse found in Dalaguete could not be determined.

Salatandre said he was in touch with Ecleo by cellphone but doesn’t bother to ask his whereabouts.

“I have yet to inform him. We will contact him,” he said after the promulgation.

It took about an hour for a court interpreter to read out key portions of the 200-page decision. The 3 p.m.promulgation was delayed for two hours.

“I’m sorry our computer is not of standard. I have to wait for the entire decision to be printed,” the judge said.

Attendance was limited to 20 each from Ecleo’s camp and the Bacolods, with a ban declared on cameras and policemen fielded inside and outside the court room.

When the “guilty” verdict was announced, two brothers of Alona, Angelito and Josebil, shed tears like members of the Crusade Against Violence (CAV). Supporters of the Bacolod family clapped their hands in jubilation.

Prosecution lawyer Fritz Quinanola stood up and shouted “Alleluia!” as the judge banged the gavel to end the proceedings.

The other prosecution lawyers who attended the promulgation were Kit Enriquez, Alfredo Sipalay, and Nicetas Ybanez.

“It’s an answered prayer. We (prosecution lawyers) didn’t receive money for defending the Bacolods. Money was the least of our concerns. The important thing is the Bacolods obtained justice,” said Sipalay.

Quinanola agreed that the next priority is to capture Ecleo.

“The ball is now with the PNP. There are around 140,000 policemen across the country. There is no reason Ecleo can’t be arrested. The police as well as the Secretary of Justice should resign if they fail to arrest Ecleo,” said Quiñnanola, a former police general. He repeated their request to House Speaker Ricardo Belmonte to remove Ecleo from the list of congressmen.

In his decision, the judge gave weight to the eyewitness testimonies of Alona’s brother Josebil Bacolod and witness Gloria Navaja.

The second witness, Navaja, said she saw Ecleo and two other men throw a garbage bag off a ravine in Dalaguete town, south Cebu.

“The prosecution witnesses deserve more credence. There was nothing to show that the witnesses of the prosecution have ill-motive against the accused. The accused is not telling the truth,” the judge said.

He said he had to carefully examine the testimonies of some defense witnesses since they were PBMA members “who are willing to die” for Ecleo.

Ecleo’s alibi that he was in the PBMA chapter in Talisay City when the incident happened didn’t convince the judge, who said it was impossible for Ecleo to be in Talisay City and in Dalaguete town at the same time.

The judge also didn’t believe Ecleo’s claims that the cadaver found in Dalaguete wasn’t that of his wife Alona. Peras cited attempts of Ecloe’s camp to get the body from the funeral house.

The judge said Ecleo should have gone looking for Alona when she was declared missing, but he didn’t even bother to verify the dead body and testifed later that he went to PBMA chapters in Lapu-Lapu City and Bogo City where he had sing-along sessions.

“I fervently hope that the victim’s soul can now rest. Let justice be done,” he said.

Peras was the seventh judge to handle the high-profile case. Other judges inhibited themselves for various reasons, a sign of the kind of pressure brought in a criminal trial where Alona’s parents, a brother,a sister, neighbor and private prosecutor were killed by gunmen traced to the PBMA.