Cheap electricity in Mindanao over 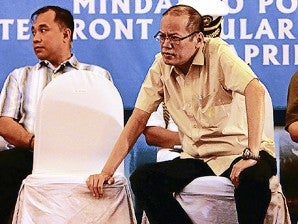 DAVAO CITY—The era of cheap electricity in Mindanao is coming to an end, President Aquino said on Friday as he launched into an impassioned defense of the government’s attempts to rationalize the power situation in the island at the Mindanao Power Summit that was called to discuss solutions to the supply shortfall that has brought rotating power blackouts the past few months.

Mr. Aquino faced a phalanx of politicians, business people and civil society groups who were all but united in their opposition to the impending privatization of the island’s hydropower plants and demanding the revision of the Electric Power Industry Reform Act (Epira).

They also opposed the proposed power interconnection between Mindanao and Leyte province, saying it will only bring the high cost of power in the Visayas and Luzon to Mindanao.

“This isn’t just about energy, this is about attracting investments and creating jobs, and this is about securing the future of this region. The dream is that, by the time I step down in 2016, this energy situation will be one less worry in the minds of Mindanaoans and investors in Mindanao alike—that by then, I can truthfully say that I left you in good hands,” he told the summit participants.

The President said only private sector investments and participation can guarantee a steady and sustainable power supply for Mindanao.

Mr. Aquino noted that Mindanao was able to get an exemption from the implementation of the Epira, the 2001 law that liberalized the power sector and set privatization in motion by breaking up the state generation monopoly and removing costly subsidies to make the price of fuel reflect its true market value.

“There was an oversupply of your power, more than adequate for your needs and cheaper than the power that anyone else had,” he said.

This status quo could well have been maintained, if things had not changed, the President said.

Mindanao’s reliance on hydroelectric power is no longer sustainable, the President said.

“Hydropower needs water. And the availability and timeliness of the supply of water cannot be considered a constant. So the situation is: the demand is constant, but the supply isn’t,” he said.

If Mindanao can no longer rely on hydropower too much to provide for its base load, it would need a more diverse mix of energy sources, he said.

“Basically, Mindanao relying on hydropower for more than half of its consistent consumption—what is called the base load—is not sustainable anymore, considering the many variables that affect water supply—from rainfall, to natural calamities, even to seasonal variations like El Niño,” he said.

Mr. Aquino warned of more inefficiencies in power generation in the island if it continues to be exempted from the privatization provisions of the Epira.

Mr. Aquino said the idea behind the Epira was to relieve the debt burden of the state generator, National Power Corp. (Napocor), through the sale of its power plants to private investors. Napocor’s debt had reached as high as P1.24 trillion in 2003, he said.

“I did not come here to lie to you. Can we keep on deferring the effects of Epira on the plants in Mindanao? Perhaps that would be possible. But is that the long-term solution? The inefficiencies will continue,” he said.

He said the power situation in Mindanao was akin to that of a business entity that, if it wants to make a profit, has to compete in the market and has to be the most efficient.

“Those efficiencies redound to our benefit. But if we keep on not attending to competitiveness or building that competitive market, then we will have the same situation,” he said.

With continued inefficiencies, funding for power generation would continue to be uncertain, he said.

The government can no longer afford paying for power plants and at the same time pay for Napocor’s debts.

“Of our P1.8-trillion budget, remember that only P400 billion is programmable. So, can government pay for new plants, plus old loans, and still provide the services and facilities you need?” he asked.

“We have to get more plants here … But how can you entice anyone to invest if their generating cost is more than their selling cost?” he said.

“The simple truth is: you will have to pay more,” the President said.

Consumers in Mindanao will have to pay more “because this is the reality of economics, not the rhetoric of politics,” he said.

Paying a little more for energy will enable Mindanao to have a stable supply of power for the future of the region, the President said.

“It will make the lives of everyone in Mindanao better—not just by allowing them to switch on light bulbs—but also because having a more consistent energy source will give Mindanao a more convincing business proposition to potential investors—not just in the energy sector,” he said.

The President said it was not true, as some quarters have claimed, that Mindanao residents will have to pay up to P14 more per kilowatt hour for their electricity. He said it was more like an additional 50 to 60 centavos per kWh.

‘We all have to contribute’

“This is simply not true. But, still, prices will increase; and you need to play your part. We all have to contribute,” he said.

The government is also looking into the formation of a Mindanao Power Monitoring Committee that will make sure the power rate increases will be reasonable.

The committee will be chaired by the Mindanao Development Authority and its members will come from the Department of Energy, National Power Corp., the National Grid Corp. of the Philippines, civil society, electric cooperatives and the business sector.

The President said Mindanao’s energy production capacity now stands at 1,280 megawatts, including the 200 MW from the barges, “which I must thank the cooperatives for contracting.”

The Department of Energy last week ordered the electric cooperatives in Mindanao to buy additional power from the diesel-fueled power barges in the face of the reduced supply from their customary and cheaper hydropower sources. Their initial refusal to do so has been blamed for the rotating power blackouts.

Mr. Aquino said repairing the Pulangi 4 hydropower plant will give Mindanao an additional 100 MW and there is a further 74 MW that can be run by embedded generation units.

“I ask you to run those units. And what the cooperatives here have to do is contract these embedded generation units and apportion the 74 MW equitably among themselves. So we can reach our target of 1,450 MW and end up with an excess of 4 MW,” he said.

“In other words, we are fixing the problem now by maximizing capacity. But this is not the end of the solution,” he said, noting that the 4-MW surplus is “very thin.”

“If any one of your power plants malfunctions, then the problem returns. Mindanao needs more generating capacity, and without putting all the eggs in one basket,” he said.

Eighteen out of 26 Mindanao governors showed up at the energy summit that was held at Davao Insular Hotel.

The governors also reached a consensus about seeking amendments to the Epira law, which they called on Mr. Aquino to certify as urgent to Congress.

“Epira has not worked for the island of Mindanao after 11 years of implementation,” said Davao del Norte Gov. Rodolfo del Rosario, speaking for the Confederation of Provincial Governors, City Mayors and Municipal Mayors League Presidents of Mindanao (Confed Mindanao).

Sarangani Gov. Miguel Dominguez believes the long-term solution to the power problem in Mindanao is to maintain Napocor or state control of the hydropower plants.

This means suspending the privatization of Napocor’s assets—that is, the hydropower plants and power barges—as the Epira law has mandated, and inviting investors to pour capital into the power generation sector, Dominguez said.

“Do not privatize the hydro, there is no need to do so, the national government will need these (the plants) to initiate the blending program which will create a more competitive energy mix for Mindanao,” said Ricky Juliano, vice president for Mindanao of the Philippine Chamber of Commerce and Industry (PCCI), which has 42 chamber affiliates with some 4,000 business members in Mindanao.

Businessmen said the power situation had adversely affected their businesses.

Rufo Pedro Soliven, president of the Zamboanga City Chamber of Commerce, said in January 2011, the Mindpro Mall, which he manages, spent only P100,000 for operating costs.

“Now, for the same month this year, we scaled to 40 percent or P140,000. This does not include operating costs to fire up our gensets, repairs for machines and equipment at the store and decreased productivity input of our workers,” Soliven said.

Lim said his company had invested in Mindanao because of the availability of resources and power, “but we are now strongly hit and affected by the power shortage.”

Bayan Muna Rep. Teddy Casiño, who attended the summit, was dismayed at the President’s performance.

“Instead of listening and keeping an open mind on the sound and logical proposals to stop the privatization of the Agus and Pulangi hydropower plants to keep power rates low, revise Epira and further develop the island’s rich renewable energy sources, he was intent on shooting down the proposals and insisting that Mindanaoans pay for higher rates from private power companies,” he said in a statement.

He said Mr. Aquino seemed gravely misinformed about the negative impact of power privatization in Mindanao, the facts about renewable energy and the failures of the Epira law.

Read Next
PH, China set aside protests to ease tensions in Shoal
EDITORS' PICK
Climate Change Commission and Nestlé PH to discover sustainability-focused solutions
NCR’s COVID-9 alert level may be downgraded from 3 to 2 soon — DOH
What’s at stake for every fighter at ONE: NextGen
Gordon calls 2 Pharmally execs ‘Senate fugitives’ after no-show in probe
Isko Moreno bares ‘two-pronged’ approach to rehabilitate MSMEs
Legarda emphasizes role of ICC/IPs in nation building this IP month
MOST READ
LJ Reyes says Paolo Contis made ‘no efforts’ to talk to her after their split
Yang’s Princeton degree raises eyebrows among senators
Gordon calls 2 Pharmally execs ‘Senate fugitives’ after no-show in probe
Drivers with no traffic violations can now renew licenses for 10 years
Don't miss out on the latest news and information.