Mactan man falls on swimmer, who dies on impact 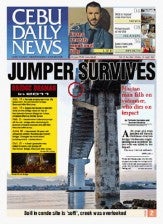 A 30-year-old man jumped off the old Mandaue-Mactan bridge Wednesday night, landing on a swimmer below who was killed by the impact.

The man, who had suffered a nervous breakdown, beat the odds when he stepped off the bridge, plunging 25 meters below. He survived with a black eye and some body bruises.

He fell on the neck Danilo Sison, 59, who was underwater spearfishing, a past time he took up after retiring in Cebu from working abroad as a welder.

It was the kind of bizarre death that happens “once in a thousand cases”, said the victim’s elder brother, Warlando Sison, 68.

“We couldn’t believe it. The odds of jumping off the bridge and hitting someone below is one in a thousand. He should have fallen on the spear but he landed on the neck of my brother,” Warlando said.

Medical staff tried to revive Sison at the Mactan Doctor’s Hospital but it was too late.

The old bridge and the parallel, more modern Marcelo Fernan Bridge connecting the cities of Mandaue and Lapu-lapu has been the scene of at least five suicide attempts last year. (As a policy, Cebu Daily News does not identify individuals who attempt suicide.)

The victim, a resident of sitio Pasansi, barangay Pajo, Lapu-Lapu City, once worked in Singapore as a welder until 2006 when he came home for good.

His wife, Maria Theresa, said she asked him to skip spear fishing that night so they could celebrate their daughter’s birthday but he went ahead with his neighbor to their usual spot under the bridge.

The structure has no formal name and is referred to by locals as the “old Mandaue-Mactan bridge” or the “first” bridge.

Lian Solasco, 26, who was in a banca said it was about 8 p.m. when he heard a loud splash.

He said the man who fell from the bridge landed right on top of Sison who was floating in the water.

After the impact, the stranger swam toward the bridge’s post and held on tightly.

Solasco pulled his unconscious friend to shore and called for help. Paramedics of the Emergency Rescue Unit Foundation (ERUF) paramedics took him to the hospital where he died a few minutes later.

Nearby residents got hold of the bridge jumper, a resident of Lapu-Lapu City, and turned him over to the police.

Asked by police why he jumped from the bridge, the man, who had long hair, a moustache and goatee, answered, “Naglain akong kabuhi,” (I’m not feeling well).

He gave his name and age, but refused to answer more questions.

A sister who came to the police station said he had suffered a nervous breakdown and would wander around the city. A barangay tanod in Babag, where the man lived, mentioned reports of drug use, said PO3 Jude Salazar.

No one could say what was bothering the man and whether he had deliberately tried to kill himself. He remained withdrawn and kept silent.

Police said the jumper had no job and was relying on the support of elder siblings since he was tasked to look after their 80-year-old grandmother. An elder brother said the man left their grandmother at home at 6 p.m. on Wednesday. Two hours later, he jumped off the bridge.

The victim’s family was reluctant to file charges after seeing the man appeared mentally disturbed.

Inspector Zenaido Pastorfide, homicide chief of the Lapu-Lapu police station, said they were weighing whether to file a charge of reckless imprudence resulting to homicide or just alarm and scandal. With Jhunnex Napallacan and Carine Asutilla