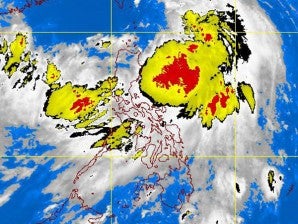 At least eleven persons were missing, 10 of them fishermen and the 11th a woman, as thousands of people were forced to flee their homes on Thursday as Tropical Storm “Falcon” (international name: Meari) unleashed widespread flooding in Bicol, according to the Regional Disaster Risk Reduction and Management Council (RDRRMC).

Several thousand travelers were stranded as flights were canceled and ferries were restricted to port, the National Disaster Risk Reduction and Management Council (NDRRMC) said.

The storm triggered heavy rains and flooding that forced more than 7,000 people to flee their homes in the Bicol peninsula, said Raffy Alejandro, Office of Civil Defense (OCD) regional director and RDRRMC chair.

Ten fishermen were declared missing after they failed to return to port in Catanduanes, Alejandro said, adding that heavy seas prevented authorities from launching a search. The missing woman was from Albay, he added.

The Philippine Atmospheric, Geophysical and Astronomical Services Administration (Pagasa) said Falcon was spotted off the coast of Catanduanes and was expected to brush past Luzon’s east coast later Thursday.

Another weather system that could turn into a storm was developing further at sea off Catanduanes, it added.

Pagasa said Falcon was expected to enhance the southwest monsoon and bring rains over the entire country.

The weather bureau said residents of low-lying and mountainous areas should watch out for flashfloods and landslides while fishermen should refrain from venturing out to sea.

As of 4 p.m. Thursday, Falcon was 420 kilometers east of Casiguran, Aurora. It had maximum sustained winds of 75 km per hour near the center and gustiness of up to 90 kph. It was moving northwest at 15 kph.

Because of its interaction with the low pressure area, Falcon had slowed down, Pagasa said.

Classes at all levels in Albay were suspended Thursday and disaster authorities moved 8,847 families or 42,612 residents to safer ground.

Floods in Metro
In Metro Manila, the Department of Education (DepEd) suspended classes in public and private high schools in several cities Thursday afternoon after Falcon dumped rain and caused flooding around the metropolis.

“In a situation where there is no typhoon signal but there are heavy rains, division officials have the discretion to suspend because they know the situation in their areas better,” Ruiz said. With reports from Leila B. Salaverria, Tarra Quismundo, Jerry E. Esplanada and AFP