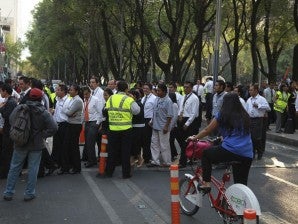 People begin returning to a building that was evacuated after an earthquake was felt in Mexico City, Mexico, Wednesday, April 11, 2012. The U.S. Geological Survey reported a preliminary reading of 7.0 magnitude for the quake, which it said was centered 238 miles (384 kilometers) west-southwest of Mexico City and 88 miles (143 kilometers) northwest of the Pacific resort of Zihuantanejo. AP/DARIO LOPEZ-MILLS

MEXICO CITY–A strong earthquake struck a sparsely populated area in the mountains of western Mexico on Wednesday, and caused tall buildings to sway more than 200 miles away in Mexico City. People evacuated some buildings in the capital, but the city government said helicopter flights detected no signs of damage.

Authorities in Michoacan state, where the tremor was centered, also had no immediate reports of damage.

The U.S. Geological Survey initially reported a preliminary reading of 7.0 magnitude for the quake, but later downgraded it to 6.5.

A quake of that magnitude is capable of producing severe damage in an urban area, but this one occurred about 41 miles (65.6 kilometers) below the surface and a tremor’s power to cause damage is often dissipated when it is so deep.

The USGS said the tremor was centered in Michoacan state 238 miles (384 kilometers) west-southwest of Mexico City and 88 miles (143 kilometers) northwest of the Pacific resort of Zihuantanejo.

Manuel Ortiz Rosete, the Michoacan state civil protection director, said no damage had been reported in major cities and coastal communities of the state.

Wednesday’s tremor was the latest in a series of strong shakes to hit Mexico City since a powerful 7.4-magnitude quake hit southern Mexico three weeks ago, but this was not an aftershock of that one , USGS geophysicist Dale Grant said.

“It’s a different earthquake. We are calling it an individual earthquake,” Grant said. “There’s a potential for aftershocks.”

Last month’s big earthquake was felt strongly in the nation’s capital, and it damaged hundreds of homes and killed at least two people near the border between Guerrero and Oaxaca states. Mexico’s seismological service said that quake has been followed by close to 400 aftershocks, including one of magnitude 6.0.

A quake alert application for Blackberrys that Mexico City’s government touted last week did not work Tuesday. Mexico City Mayor Marcelo Ebrard said the alert system has been working for quakes centered in two southern states and will begin to work for any tremors in Michoacan in the next few days.