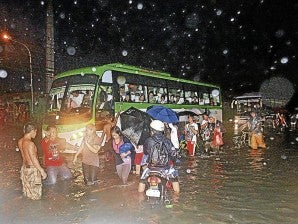 SUDDENLY, RELENTLESS RAINS. Trapped commuters sit it out on idled buses or brave the flash flood in Caloocan City, just one of the many areas in Metro Manila that went underwater in a matter of hours on Thursday. Weather experts say the southwest monsoon dumped rainfall unusual for this time of the year. RAFFY LERMA

There was no storm signal over Metro Manila on Thursday night.

At the height of the floods, Department of Education regional director for Metro Manila, Elena Ruiz, announced the suspension of all classes on Friday in public preschools, elementary and high schools in the metropolis.

Weather forecaster Aldscar Aurelio said Thursday’s rainfall in Metro Manila reached the “abnormal” level of 44.4 millimeters in just three hours, from 2 p.m. to 5 p.m., way above the normal level for June of 10 mm per day.

The weather bureau said the heavy rains were brought about by the southwest monsoon as there was no storm signal in effect over the capital Thursday night.

Rescue teams and rubber boats were deployed to rescue residents in Tatalon, Talayan-Araneta Avenue in Barangay Doña Imelda and Bagong Silangan in the city. Residents reported floodwaters up to five to six feet.

The corner of Maria Clara and Amoranto Streets, also in Quezon City, was also rendered impassable as the water reached heights of up to six feet or “lampas-tao,” Emerson Carlos, MMDA assistant general manager, said.

“Still, Ondoy was worse,” he said, saying the 2009 deluge was more sudden and practically caught people by surprise.

“It will be a 24-hour watch,” said Elmo San Diego, head of the Quezon City’s public safety department.

From 4 p.m. up to Thursday night, traffic slowed to a crawl on both sides of Edsa because many portions of the major thoroughfare were flooded, particularly in the Edsa-P. Tuazon tunnel, MMDA officials said.

In Manila, floods of up to a foot high covered a stretch of Honorio Lopez Boulevard, from Tondo Hospital to S. De Jesus Street, the MMDA said.

A portion of the Sergio Osmeña Highway also went underwater.

The downpour compounded the daily traffic jam on the old Osmeña flyover, which had been reduced to two lanes since April for repairs.

The walled district of Intramuros was also submerged.

Water rose to up to five feet in the Lagusnilad underpass near Manila City Hall.

The city government of Manila deployed trucks and multi-cabs to help stranded commuters.

“We had to wade through the floods because we couldn’t get a ride. The traffic wasn’t moving,” said Connie John, an Adamson University student from Papua New Guinea.

A tricycle ride that would normally cost P20 for short distances soared to P40.

Dripping wet, John said he and two other compatriots, Roy Kupp and Thomas Kopali, waited in vain at a mall for the rains to stop but eventually decided to brave the downpour.

“This is the first time we’ve experienced this kind of situation,” said John, who lives in the Vito Cruz area. “Everybody’s walking because traffic is not moving.”

Ric de Guzman, media officer and chief of staff of Manila Mayor Alfredo Lim, said the city government had ordered all members of the city police to help stranded commuters.

The city’s engineering and public safety departments were also instructed to deploy trucks and multi-cabs.

Public hospitals and health centers were put on alert.

“The timing of the rains caused the heavy traffic gridlock,” De Guzman said. “Everyone was home-bound when it started to rain heavily.

JP Agulay of the city’s Public Information Office reported that as of 7:45 p.m., the river’s water level had reached 15.5 meters—still two to three meters below critical level.

At press time, the Marikina River was at a spilling level.

Still, it prompted local officials to raise the “first alarm” in Barangay Tumana and Malanday, one of the worst-hit villages in Marikina during Ondoy’s onslaught.

The first alarm puts residents on alert although the river is still in no danger of overflowing. A third alarm means they already have to prepare for an evacuation.

Barangay Tumana Chair Ziffred Ancheta said he had advised some 800 families living near the river to be on alert for possible evacuation.

The Tumana River had reached its critical level as of 7 p.m., according to the MMDA.