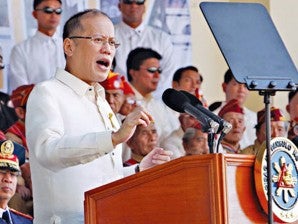 REARMAMENT President Aquino speaks about the modernization of the Philippine military at ceremonies marking Araw ng Kagitingan at the Mount Samat Shrine in Bataan on Monday. GRIG C. MONTEGRANDE

PILAR, Bataan—President Benigno Aquino III assured Filipino war veterans of subsidized health services and vowed to continue the  modernization of the Armed Forces in Monday’s Araw ng Kagitingan (Day of Valor) rites that paid tribute to Filipino and American soldiers who fought the Japanese 70 years ago.

Mr. Aquino, who addressed the elderly soldiers and their relatives gathered at the Dambana ng Kagitingan entirely in Filipino, got thunderous applause when he announced that from March 31, 599 hospitals had been accredited by Veterans Memorial Medical Center (VMMC) as regional and provincial extensions, making it easy for the veterans to access medical benefits.

“The state honors our veterans and I believe we should repay their sacrifices by caring for them,” he said.

Colonel Roberto Gacayan, 85, a war veteran from La Union province, urged Mr. Aquino and legislators not to ignore the plight of the war veterans.

“It seems that the government has been slowly forgetting what we did during the war. We hope that our benefits will be increased … We will not live long and we hope that in the remaining years of our lives, we get to feel our true worth,” Gacayan, who heads the Confederation of World War II Veterans’ Sons and Daughters Inc., said.

“If it had not been for our sacrifices, the youth will not experience the freedom they are enjoying today,” he said.

According to Mr. Aquino, VMMC has been subsidizing services for cataract surgery, coronary angiogram procedure and cardiac bypass operations.

The President again drew applause when he cited the direct remittance servicing system of the Philippine Veterans Affairs Office (PVAO), which is done through the banks or automated teller machines. This has enabled war veterans to receive their pensions faster and in correct amounts, he said.

The veterans’ list has also been purged, enabling government to generate savings that are used to support more pensioners, he said.

Ernesto Carolina, the PVAO administrator, said the House committee on veterans affairs had approved an increase in the old-age pension from P5,000 to P10,000, with an increase of P1,000 a year for the next five years.

A bill is also pending in Congress seeking to increase the burial assistance from P10,000 to P20,000.

Carolina said the PVAO had paid P4 billion to eligible pensioners, with the funds coming from the savings made from the purging of illegal claimants. 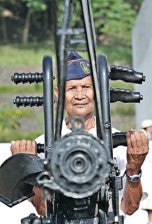 REMEMBRANCE World War II veteran Pascual F. Coloma, 87, remembers how he fought against the Japanese invasion of the Philippines in 1942, as he grips a .50-cal. machine gun, a relic of the war, at the Mount Samat Shrine in Pilar, Bataan, on Monday.

He said the hospitalization benefits in PVAO-accredited hospitals had been doubled to P800 for a maximum of 45 days. The PVAO also pays for the premium of veterans’ membership in the Philippine Health Insurance Corp.

Pensions for old age, disability and death are paid to nearly 250,000 veterans, their spouses and descendants, he said.

Leslie Bassett, deputy chief of mission of the United States Embassy, said that in the past two years, more than 18,000 Filipino veterans had received a total of over $220 million from the US government’s Filipino Veterans Equity Compensation Program.

The President told the war veterans that his administration was working to fully upgrade the capacity of the AFP.

“What we want is that should the situation turn into a conflict, we are able to give a fight,” he said in Filipino.

He then enumerated the latest purchases for the AFP: a Hamilton class cutter, renamed as BRP Gregorio del Pilar, and four combat utility helicopters.

At least 138 projects under the defense acquisition system are scheduled for completion within five years, he said.

Mr. Aquino said these are being done because of the good governance of his administration, adding that “integrity and honor result in programs that benefit our people.”

“I know that the morale of government troops is high not only because of housing or combat allowance but also because they know that we have removed the culture of corruption in the [AFP] leadership,” he said.

Mr. Aquino began his speech with lengthy quotes from Commonwealth President Manuel Quezon and General Douglas MacArthur, the American general and commander of US forces in the Philippines and Southeast Asia.

“I am greatly concerned as well regarding all the soldiers I have called to the colors and who are now manning the firing line. I want to decide in my own mind whether there is justification in allowing all these men to be killed, when for the final outcome of the war the shedding of their blood may be wholly unnecessary,” he said, quoting Quezon.

“It is no joke being responsible for the lives of thousands, millions of your countrymen. President Quezon might have asked himself: What is at stake? Is the sacrifice worth it?” Mr. Aquino said.

He said he did not want the loss of lives. “This is the root of our determination to strengthen our armed forces,” he said.

“All that we have been doing now  to lay the groundwork for reforms, improve the economy and lift our brethren from poverty, come from a single thought: We owe it to those who sacrificed before us to make sure that it is worth it, very, very worth it to live free in the Philippines,” he said.

The occasion, he added, should also be a time to celebrate the strength of character of Filipinos “to fight the enemy with bravery, honor and love for country as the sharpest weapon of all.”

Mr. Aquino also praised the Philippines’ strong alliance with the United States, and confirmed the futility of violence and necessity of working with neighboring nations.

Bataan Day in the US

In her speech, Bassett said some 7,000 people in the United States, including war veterans and students in New Mexico, had joined a reenactment of the Death March yesterday to pass what she called “the torch of memory.”

“Some carried heavy packs to make the journey harder but not as hard as the cruel Calvary our heroes endured,” she said.

“Bataan commemoration takes place today across the United States … and in the many homes where veterans and their memories still dwell. On the high seas, the sailors of the USS Bataan will pause to commemorate this day, including Master Chief Noel Vergara, whose grandfather, Romeo Miranda, was a hero of Bataan,” she said.

Bassett stressed  the importance of preserving freedom that Filipino and American soldiers had fought hard to win.

“Filipino and American soldiers relied on one another to survive the Death March and what came after. Today their children and grandchildren … proudly continue that tradition of friendship and mutual support,” she said.

“Today we live in an era of technological marvel. But you cannot download freedom from the Internet or buy liberty off the shelf. The heroes of Bataan remind us not to take what we have for granted but to cherish our freedom,” she said.

Japanese Ambassador to the Philippines Toshinao Urabe, who also spoke in Filipino, extended his country’s sincerest apology and deep sense of remorse for the Japanese atrocities during World War II.

Urabe said the United States, the Philippines and Japan had forged stronger ties and were now allies and friends. He stressed the importance of unity among the three countries.

“Sa pagkakaisa, tayo ay lalakas; sa pagkakawatak-watak, tayo ay babagsak (In unity, we will be strong; in   conflict, we will fall),” he said.

Read Next
Government spells out safety precautions vs North Korea’s rocket launch
EDITORS' PICK
New Year, New Rediscoveries
Acer Philippines welcomes you to its first flagship store
Is your company a growth champion? Stand up and be recognized!
4 senators want military, cops off UP campuses
PUP accord with DND also faces termination
Joe Biden sworn in as 46th U.S. president, urges end to ‘uncivil war’
MOST READ
Biden says Trump wrote him ‘very generous letter’
A shade at Roque? Vice asserts being a comedian, not a clown
Trump’s parting gifts to Biden: Roaring stocks, a weaker dollar, tons of debt
Graft complaint filed vs Diokno, other BSP execs for P1.75-B contract for IDs
Don't miss out on the latest news and information.