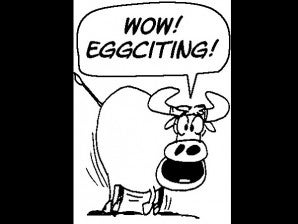 VIGAN CITY—It is a Holy Week contest where the winner is the guy who cracks the most or the biggest number of eggs.

On Maundy Thursday, as in previous years, groups of boys and a few men gathered at Plaza Salcedo here and played a game called “tinnuktok.”

Simply, it meant an egg-cracking contest and anyone could participate as long as he brought fresh eggs with him.

Played on a winner-take-all basis, all a competitor had to do was crack as many of the eggs of an opponent—and the broken eggs are his to take home for an omelette.

On a good day, one might be able to bring home dozens of eggs.

The game is taken seriously enough by the young men of the town that vendors are around at the plaza on Maundy Thursday, selling trays of eggs to contestants who might need these.

To old-timers, the egg symbolizes the resurrection of Jesus Christ, the culmination of the season of Lent.

While the Easter egg hunt is a custom in many Western countries, the egg-cracking game is a fairly localized practice. But it is not confined nor did it originate in the Philippines.

Studies have shown that egg-cracking games, or their variations, are played in eastern and western European countries, including the Mediterranean.

Most eggs were boiled, some were colored, but the origins of the contest were said to have sprung from the belief that the holder of an unbroken egg will have a longer life.

It may have come to the Philippines through the Spanish Catholic missions, said Lolita Uminga, a history professor at the University of the Cordilleras.

As to why the practice is confined only in Vigan today is unclear.

Uminga, however, pointed out that Vigan was one of the oldest Spanish encomiendas (landed estates) in the Philippines, next only to Cebu.

The egg-cracking practice might have flourished in Vigan (and in Bangued town in Abra), where some other religious traditions have also survived for centuries.

Players said the game was passed on to them by their fathers and grandfathers. The rules have not changed, they said.

During the game, the challenger would tap the narrow tip of his rival’s egg with the same end of his own (the challenger’s) egg.

The contest is made difficult by the manner in which the challenged egg is held.

With the enclosed palm gently gripping the narrow portion of the egg, the surface on which the egg is tapped is usually the exposed middle portion, where the forefinger and thumb meet.

Questions are raised between the competitors as to how much of the egg’s tip should be exposed. The owners of the challenged eggs would try to protect their eggs by using their palms as cushion.

Lure of the game

Competition preparations include testing the strength of the eggshell by tapping the shell against one’s front teeth.

Competitors check the egg for any hairline cracks by holding it against sunlight.

The lure of the game is in that no two eggshells have the same strength.

Dean Miriam Janeo of the University of the Cordilleras College of Arts and Sciences, a biologist, says the difference is determined by the duration in which the eggs are stored and the age of the source hens.

But it is not science that produces the game’s excitement.

The smartest player is the one who knows how to put enough pressure on the rival egg in order to bust it, or the one with an ability to spot hairline cracks with just the squint of an eye and then choose an egg that can withstand its challenger’s strike.