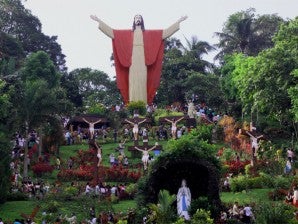 Throng of devotees flock to the 'Kamay ni Hesus' shrine in Lucban, Quezon on Good Friday to climb the spiritually sanctifying 300-step 'Stairway to Heaven' to reach the 50-foot statue of the resurrected Christ on top of the hill. DELFIN T. MALLARI JR./Inquirer Southern Luzon

This was how Fr. Joey Faller, the priest who built the Kamay ni Hesus (Hand of Jesus) shrine here, described the throngs of devotees who had been flocking to the religious site to mark the Holy Week.

“Such tremendous expression of faith is really heartwarming. It is a manifestation of the strengthening spirituality of our people,” Faller, a renowned healer, said in an interview on Good Friday.

He said this year’s visitors—devotees, picnickers, curiosity seekers, kibitzers and balikbayans—had been arriving in droves since Palm Sunday.

With more people expected to come until Monday, a holiday, Faller predicted the multitude of visitors would surpass his estimate of one million for the entire Holy Week observance.

“The shrine will surely reach an estimated 1.5 million visitors,” he said.

“They came from different parts of the country. Most visitors were newcomers, as reported to me by the shrine staff,” said Faller, a native of this quiet town at the foot of Mt. Banahaw.

Shrine staff gave no specific figures on how many devotees have actually come as of Saturday.

Since past midnight on Friday, hikers and bikers from Lucena City (24 kilometers away) and Tayabas City (12 km away) had started their trek to Lucban.

Residents along the route offered free hot coffee and cold water to the walking pilgrims.

According to Lucban policemen, similar groups came from the neighboring Luisiana and Majayjay towns in Laguna.

Faller said he had received text messages that devotees from Candelaria, Quezon, some 50 km away, were also hiking toward the shrine.

He attributed the rising number of shrine visitors every year to media reports, word of mouth and the contemplative yet jovial atmosphere at the complex.

Faller built the shrine in 2002 on a hilly part of Barangay Tinamnan, 2 km from the town center.

“They can meditate and pray here, climb to heaven, shoot photos of the scenery, interact with people from far away places, hold picnics and have a taste of Lucban’s famous delicacy. The shrine has it all,” said the 1.8-meter-tall priest, who is also a photography buff.

Noah’s Ark and the Kamay ni Hesus retreat centers were fully booked, most of the guests being balikbayan.

Most of the complex visitors spent the night sleeping in grassy areas, in small huts, and even inside the church, the Inquirer has learned.

The Noah’s Ark, a house of prayer, holds a two-story building with air-conditioned single, double and dormitory-type rooms as well as a refectory and a seminar room.

Shrine staff members are overwhelmed by the size of the multitude of devotees, he said.

“They are all happy. Though shocked, no one is complaining. All shrine visitors are brothers and sisters to them,” Faller said.

Thousands of devotees wanting to climb the 300-step “Stairway to Heaven” to reach a 17-meter-tall statue of the resurrected Christ on top of the hill, formed a long line snaking around the vast shrine complex.

“The last person on the line would wait for three hours before stepping on the first step of the stairway. The long line started to form as early as 3 a.m.,” a volunteer guard told the Inquirer.

But for most devotees patiently standing under the scorching heat of the sun, the wait was “spiritually worthy.”

“I traveled all the way from Tarlac just to visit the shrine and climb the Stairway to Heaven, I don’t mind the long hours at the line,” said Leoncia de los Santos, a retired banker.

Beside her was her teenage granddaughter, who was holding an umbrella to shield them from the heat.

Guards and volunteers arranged the climb in batches to prevent overcrowding on the hill.

Staff members claimed some movie stars had come incognito so as not to disturb the contemplative atmosphere inside the shrine complex. Politicians also visited but maintained low profiles.

The staffers did not say how they were able to recognize the celebrities and the politicians if they came, or tried to come, incognito.

One staffer noted that a number of devotees of Mt. Banahaw also visited the shrine due to the continued closure of the supposedly mystical mountain.

The Quezon police chief, Senior Supt. Valeriano de Leon, was spotted at the shrine early Friday talking with other lawmen assigned to maintain peace and order, and with a contingent of Army soldiers.

Closed-circuit televisions were strategically placed in different parts of the five-hectare pilgrim center.

After talking with the Inquirer, Faller was seen strolling around the shrine with a camera dangling around his neck, looking like an ordinary devotee. He was wearing a red bull cap, T-shirt, basketball shorts and dark shades.

Some lucky devotees who were able to recognize Faller received his blessings.

The priest was also seen holding an impromptu healing session for a sick man in a corner of the shrine.