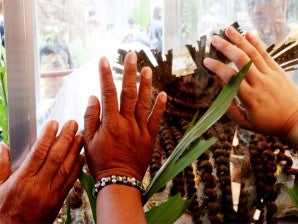 Binay, who on Tuesday began preparing for his presidential run in 2016, also ate lunch at the religious compound.

After lunch, Binay proceeded to the nearby village of Kinabuhayan and offered prayers in different sacred place at the base of the mountain, De Leon said.

After his prayers, Binay went back in Sta Lucia and conferred with De Leon on the security measures for the protection and safety of mountain pilgrims, said De Leon.

Many religious believers would climb Banahaw, particularly during the Lenten season, believing it is inhabited by heavenly spirits.

Mount Banahaw, a traditional pilgrimage site for religious devotees and mountaineers, straddles the municipalities of Lucban, Tayabas, Sariaya, Candelaria and Dolores in Quezon and parts of the towns of
Rizal, Nagcarlan, Liliw and Majayjay and San Pablo City in Laguna.

Banahaw, which used to be visited by about half a million people during the Holy Week, was closed to the public since 2004 to allow areas damaged by slash-and-burn farming and littering to recover.