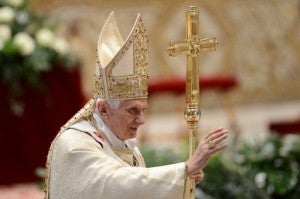 VATICAN CITY—Pope Benedict XVI issued a rare condemnation of disobedient priests on Thursday, saying those who questioned the Church over celibacy and the ordination of women were being self-serving.

“Recently, a group of priests in a European country published an appeal for disobedience, giving concrete examples of how to be disobedient,” the pope told 1,600 cardinals, priests and bishops during his homily on Holy Thursday.

The appeal was for women to be allowed to join the clergy, which was rebuffed by Benedict, who said: “As Jean Paul II irrevocably said, the Catholic Church did not receive authorization (to ordain women) from the Lord.”

His comments were a response to an “appeal to religious disobedience” launched by a group of Austrian priests in 2011.

The priests, who launched the Pfaffer Initiative in 2006 to call for reform in the Church, argue for an end to priest celibacy and the acceptance of women into the clergy to fill positions left empty as priest numbers dwindle.

Benedict said the priests were being self-serving by pushing divisive ideas at a time when the Church finds itself “in an often dramatic situation.”

He said the rebels were just making “a desperate push to do something to change the Church,” without considering the wider consequences for the faith.

“Is disobedience a way to renew the Church?” he said.