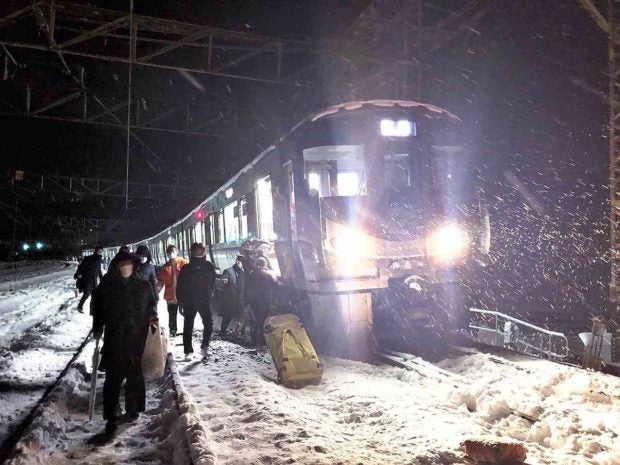 Passengers walk toward a station after getting off a train in Yamashina Ward, Kyoto, early on Wednesday morning. Courtesy of a passenger via The Japan News/Asia News Network

TOKYO — Forty-six prefectures saw subzero temperatures on Wednesday morning amid the strongest cold wave so far this winter, with only Okinawa Prefecture staying above freezing.

Heavy snow fell mainly in western Japan from Tuesday to Wednesday, leaving passengers on 16 trains stranded between stations in the Kinki region. Thirteen passengers were taken to the hospital.

The effects of the cold wave are expected to continue through Thursday.

As of 9:30 a.m. Wednesday, one death due to heavy snow had been confirmed and two snow-related deaths were under investigation, Chief Cabinet Secretary Hirokazu Matsuno announced at a press conference on the day.

According to the Japan Meteorological Agency, four locations saw their lowest temperatures on record, including Miyazaki, which dropped to minus 3.9 C. Central Tokyo recorded its lowest temperature so far this winter at minus 2.9 C.

More than 90% of the nation’s observation points, or 867, marked subzero temperatures.

According to West Japan Railway Co., passengers were stranded on 15 trains between Takatsuki, Osaka Prefecture, and Yamashina, Kyoto Prefecture, on the JR Tokaido Line, and on one train on the JR Sanyo Line. The problems are said to have occurred mainly because railroad turnouts failed on several tracks due to heavy snow.

About 1,300 people spent the night at JR Yamashina Station in Kyoto Prefecture and places nearby.

A 28-year-old office worker who was on a JR Kosei Line train that stopped near Yamashina Station managed to reach the station at around 3:30 a.m. Wednesday, after walking for about 20 minutes on snow-covered tracks. About eight hours had passed since he had boarded the train at JR Kyoto Station.

The man had stood continually on the crowded train, unable to turn his body, and there was a long line in front of the toilet. He staved off his hunger by chewing gum, and did not drink any water.

“I understood it was dangerous to [walk on] frozen tracks. But I wanted [the railway company] to get us off much earlier,” the man said, looking tired. “They could have suspended service in the first place.”

The cold wave is believed to have been caused by westerly winds blowing over Japan to the south, compared to regular years, which facilitated the inflow of cold air from near the North Pole. The meteorological agency believes that the La Nina phenomenon, which causes abnormal weather around the world, might be one factor involved.

17 dead in days of heavy snow in Japan