Bongbong Marcos on staying on as agri chief: ‘They cannot say no’ | Inquirer News

Bongbong Marcos on staying on as agri chief: ‘They cannot say no’ 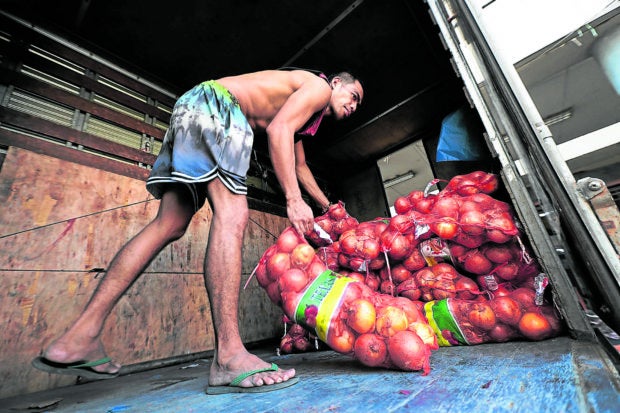 IMPORT POLICY | President Ferdinand Marcos Jr. says he’s the best person to lead the Department of Agriculture so he can introduce reforms more quickly. But Sen. Cynthia Villar cautions the DA not to rely on imports in fixing supply issues, such as augmenting the supply of onions, including this new shipment being unloaded in Divisoria in Manila. (File photo by GRIG C. MONTEGRANDE / Philippine Daily Inquirer)

MANILA, Philippines — President Ferdinand Marcos Jr. on Monday defended his decision to keep his concurrent position as agriculture secretary amid deepening challenges in the farming sector, saying he was in a better position to pursue reforms since stakeholders “cannot say no” to him as the chief executive.

As head of the Department of Agriculture (DA), which has resorted to importation to deal with supply chain issues and the high prices of onions and other produce, Marcos said he hoped to carry out his duties without having to issue “entreaties” to anyone, as a regular secretary might.

“For me, in the DA, there really are things that I can do that it would take [a permanent secretary] a long time,” he said in an interview with selected members of the press, later aired on state television.

“The president, they cannot say no to. And if they don’t fulfill my order, I can chastise them,” he said in reply to a question about calls made by some lawmakers for a full-time agriculture secretary.

Sen. Cynthia Villar, chair of the Senate agriculture committee, said she believed it would be better for the DA to have a secretary who could fully delve into the problems hounding the sector.

She was quick to clarify, however, that she’d rather let Marcos decide.

“I don’t want to preempt the president. It’s his decision. But the agriculture sector is facing many problems,” Villar said at a press briefing.

“For me, it’s better to have a DA secretary. But be sure that the secretary loves the small farmers because if not, then we cannot ensure the delivery of service [to farmers],” she added.

The DA, she said, should also shed its reputation as the “Department of Importation” for looking at imports as the cure to short-term supply issues.

“I don’t believe in that. Importation is just temporary. We should focus on [agriculture] development to help our farmers compete,” she said.

Since taking office on June 30 last year, the President has yet to appoint an agriculture secretary, opting to take on the role himself.

On Monday, Marcos said he was inclined to maintain the DA portfolio as his presidential powers allowed him to accomplish things faster.

‘These must be obeyed’

According to him, a permanent secretary can get things done but “with entreaties,” whereas he can simply issue commands.

“So that’s what I bring to the position: [It] is that when I make a decision, I say this is what we need to do; this is the plan; everyone of you follow this plan; you do this, you will do that; we will assign tasks; these must be obeyed,” he said.

And if his orders aren’t followed?

“Then I can chastise them; I can move them aside, push them into other positions, etc., etc., etc.,” Marcos said.

“But generally speaking, if the president asked you to do something, [you] would do it. If there’s somebody else to do it, they may do it — they probably do it but they may not. So we want to take that wiggle room out of that system,” he added.

If he were to appoint a secretary, Marcos said he would pick someone who would be able to coordinate plans regarding food production, non-importation, rising prices of food products, food supply chains, new farming technologies, and climate change.

“Once I know that the value chain has already been put together… what needs to be done in each part of that value chain—and we have the means and we have a plan — then we will have a secretary who will then take my place and will implement that plan. He must understand what we’re doing,” he said.

Marcos acknowledged that “some reorganization” might be needed in the DA “for the simple reason that we are doing different things from what we were doing before, and so you have to restructure the bureaucracy in like fashion.”

Last week, during his trip in Davos, Switzerland, for the World Economic Forum, Marcos said he planned to appoint a permanent agriculture secretary who was an expert in the field and who understood the complex issues in that sector.

He said he dreamed of attaining sustainable livelihood for farmers, having affordable food for all, and food security.

In the pursuit of such objectives, Marcos promised at the start of his administration to prioritize local production. But besides the implementation of existing programs, the president has yet to spell out any new reforms to boost farmers’ yield.

Instead, the DA has resorted to importation to arrest the skyrocketing prices of agricultural commodities—such as sugar and onion — and to stabilize domestic supply.

Traders were given until Jan. 27 to have all their shipments delivered to the country.

As of Tuesday, some 1,200 MT of onions has entered the country, with about half cleared for distribution to markets or institutional buyers, according to the Bureau of Plant Industry.

Prior to this, the president directed the DA to expedite the entry of 64,050 MT of refined sugar via the minimum access volume mechanism in response to supply chain issues involving the commodity.

Marcos also vowed to maintain a two-month buffer of sugar to lower the sweetener’s retail price and prevent a future shortage.

In addition, as local farmers struggled against the deluge of cheaper produce from abroad, the president has retained lower tariffs on vital imports under Executive Order No. 10 and EO No. 13.

On the other hand, EO No. 10 kept the tariff on mechanically deboned meat of chicken and turkey at 5 percent until 2024.