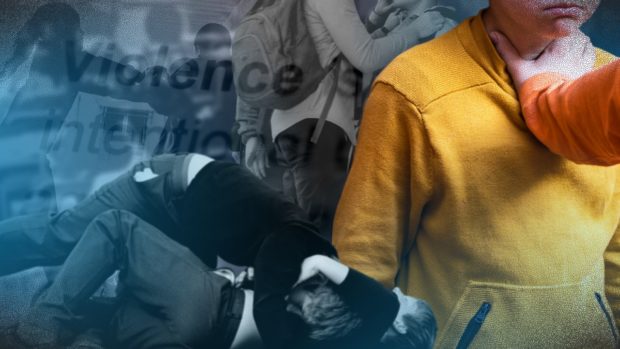 MANILA, Philippines—Violence in school “can be devastating for the victims,” the United Nations (UN) said, stressing that it has an “adverse impact on academic achievement and subsequent education and employment prospects.”

Indeed, most of the consequences of school violence are irreversible, especially when a victim’s life is ended by a classmate, a teacher, or even a school official in just a blink of an eye.

This was what happened to a 13-year-old male student who was stabbed and killed by his 15-year-old classmate inside the Culiat High School in Quezon City on Friday (Jan. 20), 5:45 a.m.

According to the report of the National Capital Region Police Office (NCRPO), the Grade 7 student, who was from Jolo, Sulu, was pronounced dead at the New Era General Hospital after suffering a stab wound in the chest.

The NRCPO said initial investigation disclosed that the victim and the suspect, who were classmates, had a misunderstanding due to jealousy. Although the suspect fled right after the stabbing, he was eventually caught by the police.

Because of this, the local government of Quezon City requested the Schools Division Office “to review security protocols in schools and implement additional measures […] to avoid a repeat of such incident.”

Lawyer Michael Poa, spokesperson of the Department of Education (DepEd), said the central office is now discussing the case with the DepEd-NCR.

This is to “determine additional controls or policies that can be put in place to prevent similar incidents from happening again,” he told INQUIRER.net on Monday (Jan. 23).

The United States Centers for Disease Control and Prevention (US CDC) said school violence is “violence that occurs in the school setting and describes violent acts that disrupt learning and have a negative effect on students, schools, and the community.” 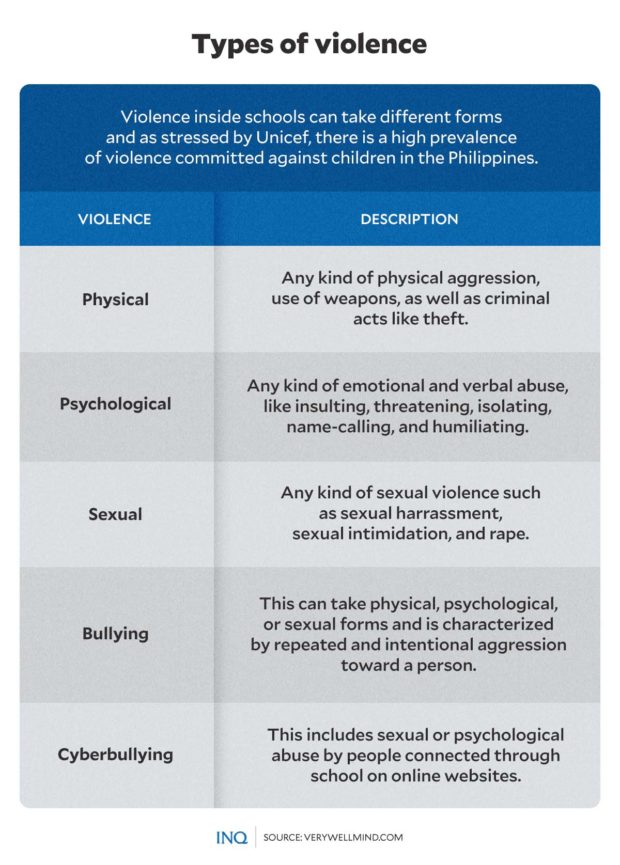 There is no decent data yet on school violence in the Philippines, but based on the National Baseline Survey on Violence Against Children, eight in 10 Filipino children experience some form of violence at home, in school, and in their community.

In fact, the killing at the Culiat High School last week is already the second case of school violence this year as it was only on Jan.16 when two students—15 years old and 16 years old—had been stabbed by a 13-year-old schoolmate.

The stabbing happened inside the Cauayan City National High School in Cauayan City, Isabela, but the suspect told radio station Bombo Radyo that it was his “self defense” against the victims, whom he said were bullying and beating him up.

According to the Bombo Radyo report, the victims—Grade 8 and Grade 9 students—were not yet able to give their side since they are still being treated at the Cauayan City District Hospital.

Likewise, on Dec. 31, 2022, what should have been a night to celebrate the New Year turned out to be a time for grief for the family of a 16-year-old student, who was killed while walking in Nagcarlan, Laguna. 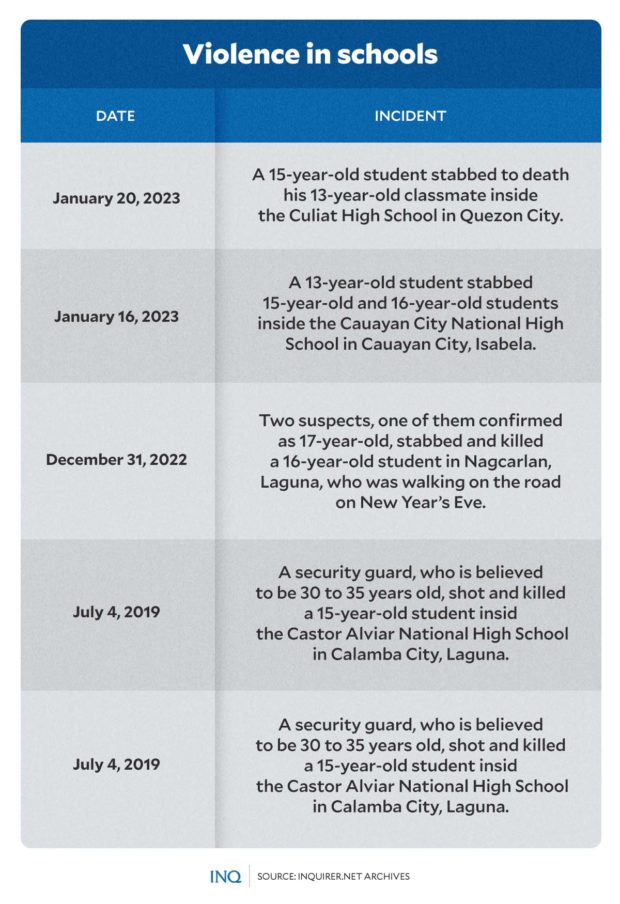 The police said two men, one of them confirmed as 17 years old, were riding a motorcycle when one of them disembarked and stabbed and killed the victim possibly because of “old grudge.”

Life also ended too soon for a 15-year-old student who had been shot and killed by a security guard inside the Castor Alviar National High School in Calamba City, Laguna on July 4, 2019.

The police said the suspect suddenly entered the victim’s classroom and shot him in front of his classmates. He was brought to the HealthServ Los Baños Medical Center, where he was eventually pronounced dead.

Then on Sept. 13, 2016, a 43-year-old teacher was also stabbed to death by her “irate” 15-year-old student inside the Pedro N. Roa National High School in Cagayan de Oro City.

What’s behind the violence?

School violence, as stressed by the UN, takes different forms—physical, psychological, sexual—and according to the United Nations Children’s Fund, there is a high prevalence of violence committed against children in the Philippines.

Based on a medically reviewed Very Well Mind report on school violence, these are some of the forms of violence that take place in a school setting—violence that it described as “anything that involves real or implied threat.”

The Very Well Mind, a website providing essential health and wellness information, said “there often isn’t a simple, straightforward reason why someone engages in school violence.”

“A child may have been bullied or rejected by a peer, may be under a lot of academic pressure, or may be enacting something they’ve seen at home, in their neighborhood, on television, or in a video game,” it said.

Some of the risk factors that can make a child more likely to commit school violence are poor academic performance, prior history of violence, hyperactive or impulsive personality, mental health conditions, and witnessing or being a victim of violence.

It said alcohol, drug, or tobacco use, dysfunctional family dynamics, domestic violence or abuse, access to weapons, delinquent peers, and poverty or high crime rates in the community are also risk factors to consider.

‘We can prevent school violence’

The US CDC stressed that “all students have the right to learn in a safe school environment” so school violence should be kept at bay—something that is so much possible.

“Many factors contribute to school violence. Preventing school violence requires addressing the factors that put people at risk for or protect them from violence,” it said on its website.

“Research shows that prevention efforts by teachers, administrators, parents, community members, and even students can reduce violence and improve the school environment.” 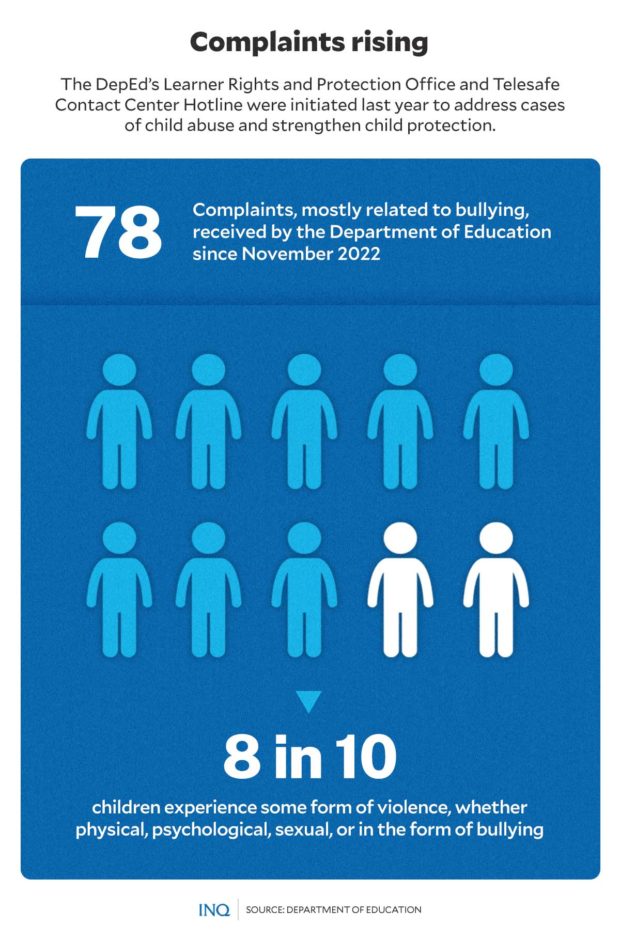 After the stabbing at the Culiat High School, DepEd-NCR reminded school principals to strengthen security measures inside and outside the school to prevent violence being committed by or against students.

The DepEd-NCR said in a statement last week: “We are deeply saddened and disturbed that violent incident[s] such as this happened among our students inside the school, which is supposed to be a safe place.”

It then called on school administrators, teachers, non-teaching personnel, parents, students, and all stakeholders to raise awareness and educate children to become peace-loving and responsible community members.

“DepEd-NCR shall continuously work with all stakeholders to ensure the safety and protection of our learners in our schools,” it said.

Cabral said in a radio interview that teachers should be vigilant, in relation to the department’s Child Protection Police, especially on student concerns such as personal problems and those related to school bullying.

The Alliance of Concerned Teachers (ACT) NCR Union also stressed that schools were supposed to be safe spaces both for teachers and learners.

“As such, inflicting violence against any member of the school community, whoever the perpetrators are, needs to be condemned in the strongest terms, and actions and thorough investigation need to be taken immediately,” she said.

The progressive union vowed to strengthen its efforts in teaching students about the consequences of bullying and school-related violence, as well as intensifying initiatives to build a “culture of dialogue, peace, respect for human rights and zero-tolerance to violence.” 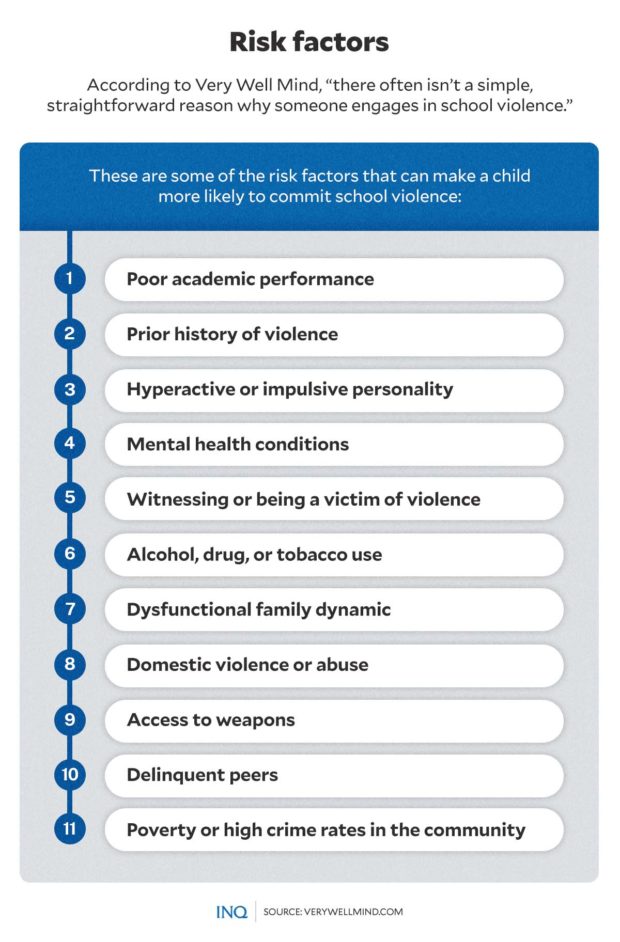 Dr. Aimee Daramus, a licensed clinical psychologist, told Very Well Mind that some of these steps can prevent school violence:

Report any hint of violent behavior to school officials.

Children who witness or experience violence should keep telling adults (parents, teachers, and counselors) until someone does something to address the problem.

Reach out to children or other people at the school who seem to be angry or upset, or appear fascinated with violence. Reach out to any child, whether bullied, bullying, or neither, who seems to have anxiety, depression, or trouble managing emotions.

It can be helpful to look out for warning signs of violence, which can include talking about or playing with weapons of any kind; arming pets or other animals; threatening or bullying others; talking about violence, violent movies, or violent games; and speaking or acting aggressively.

RELATED STORIES: 15-year-old boy critical after being stabbed in a tiff with other youths in Manila