AFP in high morale despite some ‘displeasure’ in ranks – Centino 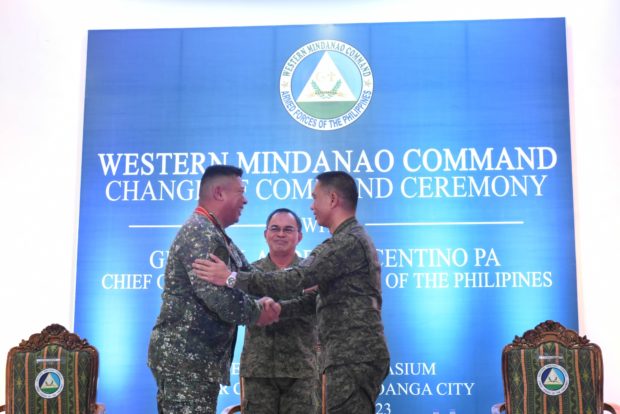 ZAMBOANGA CITY, Zamboanga del Sur, Philippines — “We are in a high state of morale..”

This was how Gen. Andres Centino described the Armed Forces of the Philippines (AFP) amid recent jitters about leadership changes in the country’s security and defense establishments.

But Centino admitted that there was “displeasure” among the ranks due to delays in the promotions and designations of officials.

Centino, who was reappointed AFP chief of staff by President Ferdinand Marcos Jr., presided over the leadership turnover of the Western Mindanao Command (Wesmincom) here on Friday, a major military post that has had no full-time commander for some four months.

Also on Friday, Centino donned the rank of major general on Rojas who is set to assume as commander of the AFP’s Special Operations Command based in Fort Magsaysay in Palayan City, Nueva Ecija.

According to Centino, the delays in the movements of AFP officers had already been addressed when Secretary Carlito Galvez took the helm of the Department of Defense more than a week ago.

Centino said the president signed the promotions before leaving for Davos for the annual gathering of the World Economic Forum.

Galvez, who was present in the command turnover, assured that there were no ramblings among the AFP officers because they had acted swiftly on the concerns about promotions.

He hopes to iron out the remaining issues that caused the delays.

Centino noted that despite the disappointment of some officers, no military operational missions on the ground were affected or disrupted, saying this is an indication of the professionalism of the AFP.

AFP admits being surprised with speed of Defense leadership shuffle