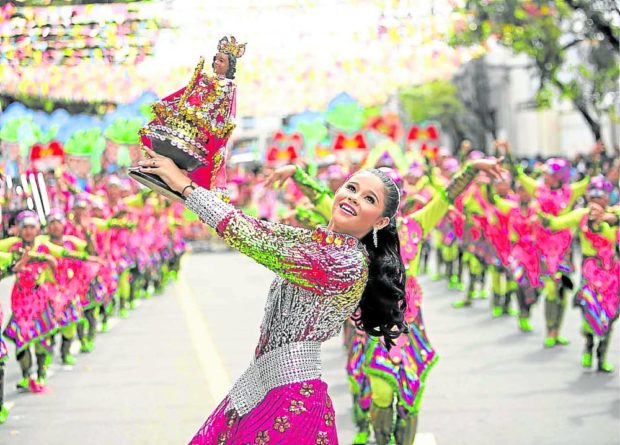 Sinulog dancers perform in the streets of Cebu City during the grand parade before the coronavirus struck the country in March 2020. The rituals in honor of the Seٌor Sto. Niٌo de Cebu is a demonstration of the Cebuanos’ faith. (Photo courtesy of Cebu Daily News)

CEBU CITY — From a province-wide event to a national celebration.

This was the city officials’ plan for the Sinulog Festival, one of the country’s prominent and most attended festivals.

City Mayor Michael Rama said the local government would aggressively promote the Sinulog to encourage more out-of-town contingents to join the grand parade and ritual showdown and to invite more spectators from the different parts of the country.

He assured the public of improvements to make next year’s festival more pleasing.

“After using the tagline ‘One Cebu Island Sinulog 2023’ for this year’s celebration, the next thrust of the city government is to have it called ‘Sinulog Philippines,’ the mayor said during the awarding of Sinulog 2023 winners on Monday.

Despite criticisms, Rama said next year’s Sinulog would still be held at the South Road Properties (SRP), Cebu City’s newest commercial hub that rose out of a city-developed 300-hectare reclamation area.

Three days before the Sinulog last Jan. 15, Cebu Gov. Gwendolyn Garcia announced the decision of the contingents from the province, including that from Consolacion, whom she was supposed to dance with, to pull out from the Sinulog to ensure the safety of their participants since the venue remained muddy due to the incessant rains.

The city, however, managed to finish the preparation by Sunday. It also did not rain as the sun came out after almost a week of nonstop rain.

Aside from the 16 dancing contingents, the Sinulog 2023 drew 40 floats, eight “higantes,” and six puppeteers.

The 70 participants who joined this year’s Sinulog, however, were fewer than the 105 that joined in 2020 before the lockdowns due to the COVID-19 pandemic.

The Sinulog is held every third Sunday of January to celebrate the feast of the Santo Niño or the Holy Child Jesus.

There is more to be improved, particularly in providing a better audience area and managing the traffic flow, he admitted.

In a social media post on Monday, Rama thanked the spectators for being part of Sinulog 2023.

“My heartfelt gratitude to all those who took part and helped in the Sinulog 2023. Had it not been because of you, I should not have done anything,” he said in Cebuano.