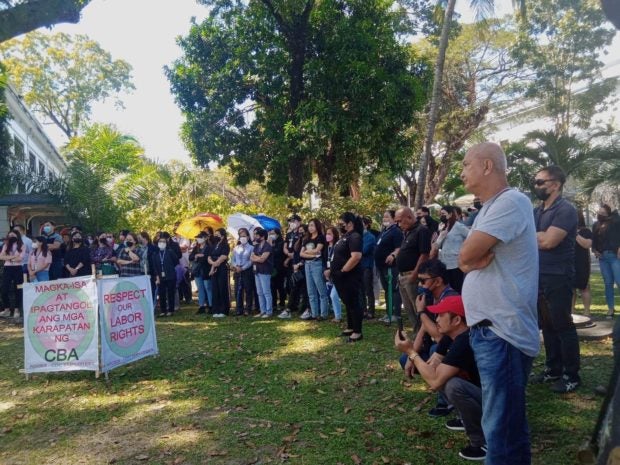 Clark Development Corp. employees protest the non-inclusion of their P493-million benefits in the government’s new salary scheme as they stage a picket for the third time on Thursday, Jan. 19. (Contributed photo).

CLARK FREEPORT, Pampanga — At least 224 rank-and-file employees of Clark Development Corp. (CDC) staged another noontime picket Thursday, their third since Tuesday when the Department of Labor and Employment averted their strike against the removal of union-generated benefits worth P493 million under a new government salary system.

More workers joined the picket line, which drew only 138 on Wednesday, according to Edsel Manalili, president of the Association of CDC Concerned Employees (Acces).

The group has 470 members from the rank-and-file employees and 190 from the public safety department of the CDC, which oversees the conversion and development of Clark from an American military air base into a civilian commercial freeport.

Manalili said the union, which has had collective bargaining agreements with the CDC for 26 years, would continue protesting outside regular office hours until President Marcos Jr. heeds their appeal to order the Governance Commission of Government-Owned and Controlled Corporations (GCG) to include the benefits in the Compensation and Position Classification System (CPCS) issued in June 2022.

Based on a Jan. 16 assumption of jurisdiction order, Labor Secretary Bienvenido Laguesma said the CDC has a pending petition to Marcos, subject to GCG endorsement, for the recognition of the allowances, benefits, and incentives as provided for in the [Collective Bargaining Agreement between the CDC] and the union, but which are not included in the GCG-approved CPCS.” INQ