Dancing the Sinulog, the right way 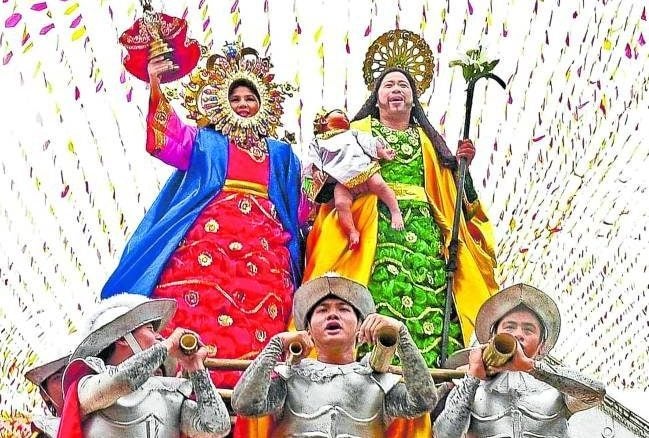 UNWAVERING | Val Sandiego and his wife Ofelia, along with dancers of the Sandiego Dance Company, highlight religiosity in their performance in keeping with the original concept of Sinulog, which
started as a form of a prayer dance. (CONTRIBUTED PHOTO)

CEBU CITY, Cebu, Philippines — For over four decades, members of the Sandiego Dance Company have been among the popular faces in Cebu’s Sinulog, one of the country’s most attended religious and cultural festivals.

They vowed never to pack their costumes and props so they can continue performing during the Sinulog Festival despite being elevated to the competition’s Hall of Fame for winning the grand prize for three consecutive years in the 1990s.

Its members, present and past, have not just shown their deep devotion to the Sto. Niño, but want to contribute in preserving the Sinulog tradition and make sure that Cebuanos will always be reminded of their colorful heritage.

“As a devotee of the Sto. Niño, I feel that I have a responsibility to keep the tradition going. We need to put faith into our culture through the Sinulog,” said Val Sandiego, the group’s leader and choreographer.

Sandiego, who has been attending the festival with family members and dancing the Sinulog since he was a year old, has seen how the beat and choreography evolved and deviated from the original traditional prayer dance over the years.

He wants to put more religiosity to the festival by drawing attention to the Sto. Niño and the original dance offering.

“As much as possible, our mission is to really preserve it (original Sinulog). There’s so much that has changed. Some Sinulog dances have been modernized. I think it’s really time for us to really preserve the authenticity of this worship dance,” he added. 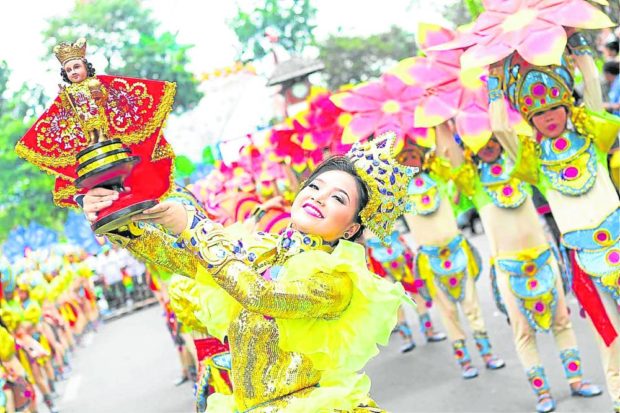 FAITH TO THE NATIVE BEAT | Cebu students participate in the 2020 staging of Sinulog Grand Parade, the highlight of the 10-day festivities to honor the Holy Child Jesus. (CEBU DAILY NEWS)

Sinulog, which has been celebrated for 43 years, started as a ritual prayer and dance to the Sto. Niño de Cebu that was given as a baptismal gift by Portuguese explorer Ferdinand Magellan to Cebu’s Queen Juana in 1521.

The dance later became a cultural and religious celebration, drawing millions of people to Cebu every third Sunday of January.

Unfortunately, the Sandiego Dance Company will not be able to perform during the Sinulog Grand Parade today after their choreographer suffered a stroke in June last year. But the group’s members still danced the Sinulog after the reenactment of the first Mass and baptism at the Basilica Minore del Sto. Niño yesterday.

“Even in the middle of a health problem, I have so much to thank the Lord for,” said the 60-year-old Sandiego, a recipient of an award from Pope Francis in recognition of his meritorious contributions to the propagation of the Christian faith. The recognition was conferred on him by Cebu Archbishop Jose Palma on Dec. 15, 2022.

Members of the Sandiego family have been part of the Sinulog since its inception in 1980.

Sandiego’s mother, Luz, and former Cebu City Mayor Florentino Solon incorporated the festival into the Fiesta Señor celebration which has long been observed by Cebuanos.

Sandiego said his mother, a ballet instructor and dean of the Physical Education Department of the University of San Carlos in Cebu City, was tasked by Solon to research on the Sinulog for a festival.

Luz then borrowed the basic dance steps from the late Estelleta “Titang” Diola who was considered the “Keeper of the Sinulog” beat.

Sinulog’s original dance — one step forward and two steps backward — was patterned after the dance ritual called “Sinug,” a dance prayer performed before the image of the Sto. Niño.

The dance itself imitated the waves of the sea which is called in Bisaya as “sug” and where the term Sinug was coined from. 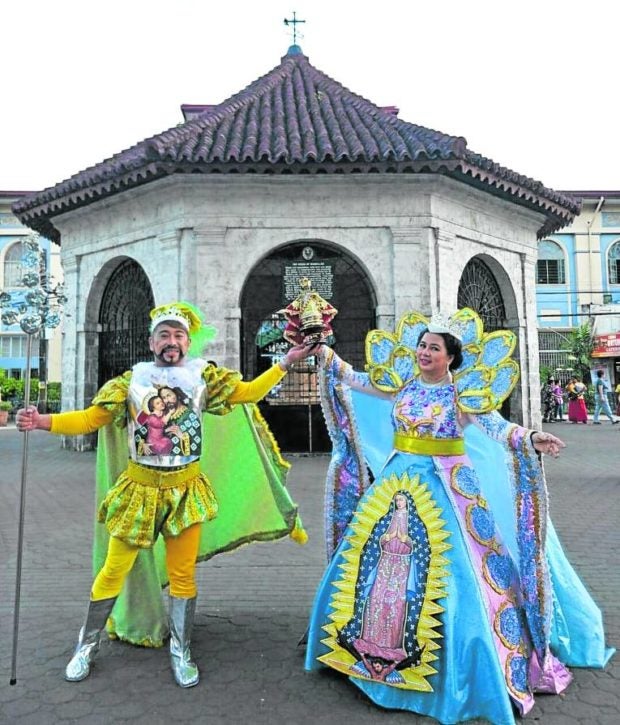 Years later, the move became a dance ritual performed by candle vendors at Basilica Minore del Sto. Niño which houses the original image of the child Jesus, the oldest Christian image in the country.

To this day, candle vendors still dance and follow the original steps before the Sto. Niño image as they pray for the petitions of churchgoers buying their products.

Luz’s students performed the Sinulog dance in Cebu’s first Sinulog festival 43 years ago and every year since.

It became her “panata” (vow) to the Sto. Niño to make the performance better, grander, and more festive every year, as she asked the Holy Child Jesus to cure her husband, Rafael, who was suffering from brain cancer. Rafael was eventually cured.

When his parents migrated to the United States in the 1980s, Sandiego and his wife Ofelia did not only take over the dance studio business but also the Sinulog festival tradition.

Their mesmerizing performances and creative costumes made from indigenous materials earned the Sandiego Dance Company both the grand prize and best in costume awards in the festival from 1995 to 1997. They were subsequently elevated to the Hall of Fame and became a special guest performer at every Sinulog Festival.

They also continued to perform at the basilica every after the fluvial procession or a day before the feast day of the Sto. Niño.

The dance troupe members are usually dressed in Spanish-era costumes with the men wearing uniforms of Spanish soldiers, complete with swords and shields.

The female members would bring candles and handkerchiefs for a dance drama, depicting the arrival of Christianity in Cebu.

In January 2001, the Sandiego family’s faith was tested when their house and dance studio in Cebu City were destroyed by a fire that also burned their costumes for the Sinulog that year. No one in the family, however, was hurt.

The following day, Sandiego’s family and his group’s dancers performed during the reenactment of the first Mass and Christian baptism at Basilica Minore del Sto. Niño clad only in white shirts and plain pants.

The unexpected performance drove the audience to tears as everyone was amazed at their quick recovery and unwavering faith to the Sto. Niño.

Sandiego’s dancers are mostly professionals like teachers, businessmen, and even doctors who set aside time to practice and perform in the Sinulog. If they were too busy, their children took over.

The dancers have a special petition every time they dance the Sinulog — healing from an illness, a successful business venture, or passing an exam. Most of these petitions were granted right away or a few years later.

In January 2015, the renowned dance troupe performed the Sinulog during the Holy Mass that Pope Francis celebrated at Quirino Grandstand in Manila. Aside from Sandiego and his wife Ofelia, their children — Angelica Luz, 34; Andrea Lauren, 33; Andre Lester, 27; and Anna Louisa, 26 — joined the dancers.

But it was not the first time the group danced before a pope. In February 1981, the group also performed at the old Lahug airport in Cebu City during the visit of then Pope John Paul II, now a saint of the Catholic Church.

Despite the popularity of the dance company, Sandiego insisted it was never about fame.

“We are dancing not to show off our skills and expertise but to express our devotion to the Sto. Niño. I hope those behind the Sinulog now will realize that there’s more than the dance. We should always remember that the deeper essence of the Sinulog is to offer a worship dance for the child Jesus,” he said.