An outraged Judge Wilfredo Navarro yesterday bowed out of the St. Theresa’s College case where  high school girls  were shut out of graduation rites over “lewd” bikini photos posted on Facebook. 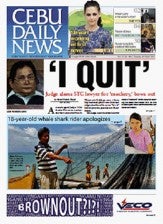 The judge  said the school’s lawyer  made a “mockery” of the court by defying his order that would have let two students join their  commencement exercise last Friday.

The Regional Trial Court (RTC) judge said he was so upset, he was inhibiting himself from further handling the case because he could “no longer muster the cold neutrality” of an impartial judge.

In his order of voluntary inhibition, Navarro returned records of the case to the clerk of court to re-raffle and assign to a Family Court.

The judge vented his ire on the school’s lawyer Romeo Balili, saying Balili  misled the Catholic school and the public with “false, erroneous and absurd legal opinions” to defy the Temporary Restraining Order issued against the STC High school by saying it lacked a bond and that a motion for reconsideration was still pending.

For this “buffoonery,” the judge said the Integrated Bar of the Philippines should  impose disciplinary sanctions on the lawyer.

The high school had barred five graduating students in the senior class from joining the March 30 commencement exercise over violations of the “Student Handbook” on  drinking alcohol in public places and uploading “lewd” photos of themselves in their Facebook account.

Parents sued STC for damages and later a criminal complaint, but the private school’s commencement rites went ahead last Friday with the students and their families shut out of the ceremony.

The judge said he was so bothered after learning about the school’s refusal to comply with the TRO that he lost sleep.

“It’s very unfortunate. It saddens me especially that  this happened in the season of Lent when we try to be forgiving and save our own souls,” the judge told reporters.

“I couldn’t sleep for a few days. I just leave it to God,” he added.

Citing the school in contempt of court is one option. But the motion, which requires a hearing, would be decided by the next judge handling the case.

A motion was filed yesterday by Enrique Lacerna, whose client is a mother and a physician from Lapu-Lapu City whose daughter was allowed to graduate but was barred from the commencement rites.

In his order, Judge Navarro said the TRO was necessary due to the extremely urgent need to restrain the school from performing acts “that may by now have already caused great and irreparable damage and injury” to the petitioning  parents and their daughters.

He said the school’s “defiance” of the order was based on  “lame and flimsy excuses” that STC had filed a motion for reconsideration, which was still pending and that the court order lacked a bond.

The judge said the school’s lawyer knows that a TRO is immediately executory and can’t be barred by a motion for reconsideration.

Also, it is the discretion of the judge whether to require a bond.  In this case,  having the students attend the graduation “would not require additional cost” on the part of the school.

“What is worse throughout the whole fiasco is that Atty. Romeo J. Balili . . . in a press conference, daringly and unashamedly spread through the media his false, erroneous and, to boot, absurd legal opinions apparently designed to mislead not only his own clients, but also the public at large.”

The judge also said the case should be heard by a Family Court since it involves the rights of a child in line with Republic Act 7610, the special law on child abuse that Judge Navarro had cited in his earlier order.

(The case may have been inadvertently been raffled to his sala, he said.)

The judge said STC’s legal counsel has put to “extreme public ridicule” and made a “mockery” of the court and the entire judiciary with his actions.

This “had certainly caused an outrage that has cut deep into the psyche and the equanimity of the presiding judge,” said Navarro.

“(I) feel I could no longer muster the cold neutrality expected of an impartial judge” needed to render a fair and objective verdict.

Sought for comment, Balili said he welcomes the judge’s decision.

“I salute him for doing that,” Balili told Cebu Daily News.

“I’m very sorry if he is offended. I have the obligation to protect my client.”

In a talk with reporters, Judge Navarro said  the lawyer had set a bad example.

“This is a defiance of the lawful order of the court. This is setting a bad precedent. If we will allow this to happen again, time will come when nobody will go to the courts anymore for relief and assistance. It’s very unfortunate that this came from the very people who are teaching us the right path,” said the judge.