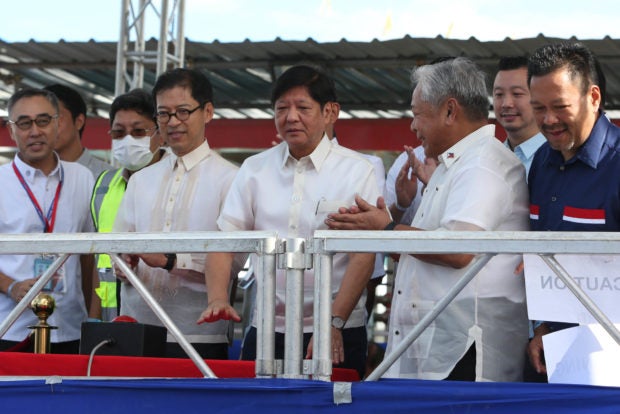 MANILA, Philippines — The tunnel works for the first contract package (CP) of the 33-kilometer Metro Manila Subway Project (MMSP) started on Monday, following the launching of the tunnel boring machine (TBM) at its depot in Valenzuela City.

“Today’s start of tunneling work signifies a point of no return. We are going full speed ahead to complete the country’s first subway,” Transportation Secretary Jaime Bautista said during the launching ceremony.

Kazuya Osako, chair of the joint venture entity, said six TBMs would be used for this portion of the P488.4-billion underground train system. He said “each tunnel would be completed in 12 months.”

According to the Department of Transportation, the distance between the Valenzuela depot and QH station is 1,508 meters; QS station to TS station, 1,456 m; and TS station to NA station, 1,780 m.

Around 1.2 million cubic meters of soil will be excavated by the TBMs, which is equivalent to 500 Olympic-sized swimming pools.

The transportation department clarified that no road closure would be implemented as a result of the tunnel boring activities.

The entire subway project is slated to be operational by 2028. “This ambitious 33.1-kilometer train system of the Philippine National Railways, which we dubbed as the ‘Crown Jewel’ of the rail sector, will not be side tracked from getting completed according to schedule,” Bautista said.

The subway, which is designed to have 17 stations, will connect Valenzuela City to Pasay City. It is expected to service over 519,000 passengers daily once operational.

The subway has a spur line to Ninoy Aquino International Airport (Naia) Terminal 3 in Pasay City.

With the construction of the subway system, Filipinos may soon experience a travel time of only 35 minutes from Quezon City to Naia from the current one hour and 10 minutes.

Bautista underscored the “urgent need” to build a railway station at Naia.

“During the recent holiday rush when I inspected Naia Terminal 3, I discovered the urgent need of providing a railway station as one of the multimodal land-based transport options for arriving passengers,” he said. For TBM Nos. 1 and 2, it drives from depot to Quirino Highway station.

After Monday’s launching, it will drive to the depot area for several months, run through residential areas, and arrive at Quirino Highway Station in December 2023.

President Marcos led the ceremonial launch of the TBMs set to begin work on the country’s first underground railway.

Speaking during the ceremony at the MMSP depot in Valenzuela City, the President said he “can only look forward to better days” in the mass transportation in the country.

“We take pride in its construction as a landmark event. I thank everyone who have toiled and continue to toil to ensure the realization of such an ambitious endeavor,” Mr. Marcos said.

He added that having an effective and efficient transportation system would have “multiplier effects” on employment, the economy and the society and would also “bring comfort, convenience, and an easier life for all.”