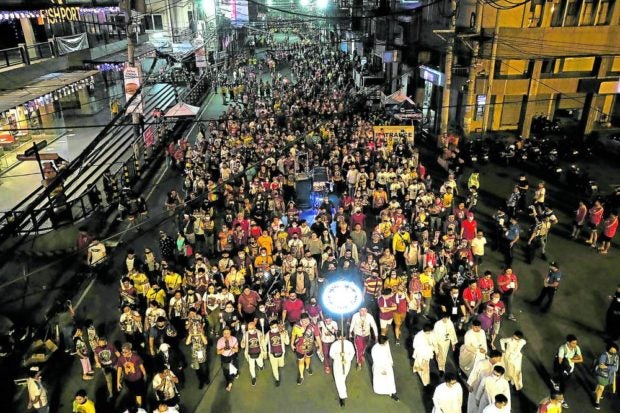 PROCESSION BEFORE DAWN Thousands of Black Nazarene devotees arrive in Quiapo after a “Walk of Faith” from Quirino Grandstand in the wee hours of Sunday. —RICHARD A. REYES

MANILA, Philippines — It seemed such a big crowd, yet they were only a fraction of the usual million-strong flock of devotees as they joined the first “Walk of Faith” on Sunday ahead of the Feast of the Black Nazarene, in lieu of the often chaotic “traslacion” which drew mammoth crowds before the pandemic.

Church authorities reported that around 88,000 devotees attended the predawn procession from Quirino Grandstand in Luneta to Quiapo Church, which, unlike the disorder of previous years, went without any major incident.

The feast marks the anniversary of the traslacion or the transfer in 1787 of the image of the Nuestro Padre Señor Jesus de Nazareno from its original location in Intramuros to its current home in the Minor Basilica of the Black Nazarene in Quiapo, Manila.

Devotees started their walk at around 1 a.m. from the grandstand, where the life-sized image of the cross-carrying Black Christ had been on display since Saturday.

They followed the route of the traslacion that would have transported the religious icon back to its shrine at Quiapo Church, but this time without the icon which remained at Quirino Grandstand.

The Walk of Faith ended at around 4:15 a.m. as the participants reached the church in time for the dawn Mass.

Citing health and safety concerns due to the pandemic, church authorities for the third time canceled the annual traslacion, which is held every Jan. 9 as the highlight of the Feast of the Black Nazarene.

In past years, the procession would take over 20 hours because of the large crowd clogging the streets in hopes of seeing or touching the Nazarene figure.

Church authorities this year introduced the Walk of Faith procession as an alternative to the traslacion.

“In terms of the goals that we desired to achieve, I think we were able to draw devotees into a new, albeit temporary way of having the procession without the image. We did it in an orderly and prayerful fashion and we were able to reach Quiapo Church on time,” the priest told reporters.

“In terms of the logistics involved, I think we were also able to hold the procession safely and orderly. Despite having an 80,000-strong crowd, no casualties and security threats were reported and there were no major disruptions in the procession,” Valdez said.

Devotees like Rosie Hermoso said they were elated just to be able to participate in the religious festival again after its cancellation in 2021 and 2022 amid public health concerns.

Hermoso, who attributed the miraculous healing of her son’s heart condition to the Black Nazarene, said she was overjoyed to have been picked to help prepare the religious image for display.

At Quirino Grandstand, devotees were allowed to touch or wipe the foot and a portion of the cross of the Black Nazarene image—but were discouraged from kissing it, as others had done before the pandemic.

Hourly Masses would continue to be held at Quiapo Church throughout the day.

In a message released by Malacañang, President Ferdinand Marcos Jr. said he was one with the Catholic faithful in marking the Feast of the Black Nazarene, adding that he wished them a safe, meaningful, and solemn observance.

The president described the feast as “a symbolic movement of our collective earthly journey, finding new meaning in our passions and sufferings as people.”

“May the image of Jesus Christ inspire us to center our existence around love, hope and compassion as we open up ourselves to others and the world during these extraordinary times,” Marcos said.

“Together, let us embody these values as we write a new chapter in our nation’s narrative so we can altogether usher in an era of peace and prosperity for all,” he said.

Marcos said the devotion to the Black Nazarene should be a reminder of its “deep-rootedness in our Filipino culture of overcoming the great trials and tribulations in our midst.”

“Indeed, it is through our faith that we can conquer the storms that loom ahead of us and bring forth a life filled with grace and steadfastness,” he said, as he called on the faithful to “take this highly anticipated religious tradition as a symbolic movement of our collective earthly journey, finding new meaning in our passions and sufferings as people.”

Processions in honor of the Black Nazarene would also be held in various parts of the country.

The President earlier declared Jan. 9 as a nonworking holiday in Manila.

DOH to Nazarene devotees: Keep off feast if unvaccinated vs COVID

TAGS: Feast of the Black Nazarene, Walk of Faith