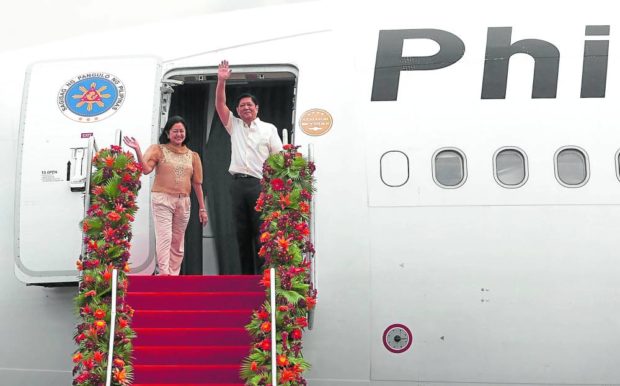 President Marcos and First Lady Liza Araneta-Marcos board the plane to Beijing on Tuesday afternoon for his three-day state visit to China. (INQUIRER / MARIANNE BERMUDEZ)

MANILA, Philippines – President Ferdinand R. Marcos. Jr on Wednesday said that his Chinese counterpart Xi Jinping has committed to “find a compromise and find a solution” for Filipino fishermen to resume fishing in the West Philippine Sea.

Marcos and Xi earlier met during the former’s three-day state visit to China – his first to a non-Asean country since assuming office last year.

“We also discussed what we can do to move forward to avoid any possible mistakes, misunderstandings that could trigger a bigger problem that we already have,” he said in a video shared to reporters.

“And I was very clear in trying to talk about the plight of our fishermen. The President promised that we would find a compromise and find a solution that will be beneficial, so that our fishermen might  be able to fish again in their natural fishing grounds.”

Prior to his state visit to China, Marcos was urged by Filipino fishermen to prioritize pushing back on the Asian superpower’s encroachment in Philippine waters during his meeting with Chinese leaders.

The country’s maritime dispute with China has long strained their relations, especially after a 2016 arbitral ruling invalidating the latter’s sweeping claims and favoring the Philippines.

The Department of Foreign Affairs (DFA), in a press briefing in Malacañang last week, said it will be formalizing a communication mechanism with its Chinese counterpart during Marcos’ state visit “to avoid miscalculation and miscommunication in the West Philippine Sea.”

Marcos, according to the DFA, is likewise expected to discuss “the full range of our bilateral relations–both the positive aspects of it and the sensitive aspects of our relations, which includes the issue of the West Philippine Sea and China’s activities in the area.”

Marcos said he and Xi covered a wide range of subjects from addressing the trade imbalance between both countries to sharing experiences on the shift to renewable energy.

“It has been a very wide ranging discussion, and we talked at great length, towards the end, about climate change. We are all very much in agreement, all the leaders that I have spoken to thus far, are very much in agreement that this is a subject that we cannot leave alone or it will come back to haunt us in the future if we do not prepare,” he said.

Marcos also noted that he and Xi had agreed to engage in an exchange of experiences on various matters like “the transfer of technologies and the different strategies for the move to renewable energy.”

“It really, in the end, became a fairly detailed discussion which made the meeting [run] very long and that’s why I’m actually very optimistic, because President Xi seemed to be genuinely interested in all of these issues and finding a way to move forward to again strengthen the relationship between China and the Philippines,” he added.

Marcos said he has directed Foreign Affairs Secretary Enrique Manalo and Philippine ambassador to China Jaime FlorCruz “to pursue the subjects that we had discussed and to make sure that they do not remain in the wind but will actually come to fruition so that the effects will be felt by both our people.”

The Philippines and China has so far signed 14 bilateral agreements, ranging from agriculture, infrastructure, development cooperation, maritime security and tourism, over the course of the state visit.