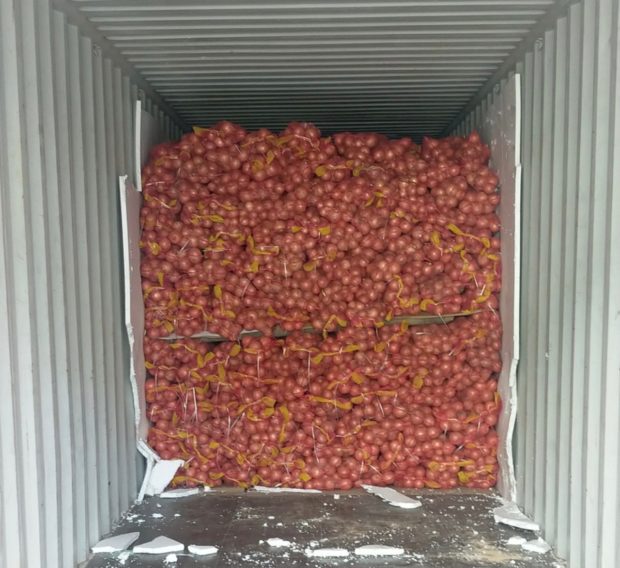 This photo from the Customs Intelligence and Investigation Services (CIIS) shows sacks of yellow onions which agents discovered upon inspection of three containers docked at the Port of Manila. The onions are concealed between stacks of used or ukay-ukay clothes. According to the Bureau of Customs, the shipments are consigned to SB Express Logistics and Business Solution Inc..

On Tuesday, smugglers brought in yellow onions worth P17 million by hiding them in piles of secondhand, or ukay-ukay, clothing.

Reports from the Bureau of Customs (BOC ) showed that the Customs Intelligence and Investigation Services (CIIS) issued alert orders last December 22 for three containers from China that were consigned to a certain SB Express Logistics and Business Solution Inc.

Upon inspection, all three containers docked at the Port of Manila yielded onions among an assortment of clothing.

The report came as President Ferdinand Marcos Jr. left the Philippines for a three-day state visit to China.

Farmers asked Marcos to raise the issue of rampant smuggling of agricultural products, including onions, from China during his visit there from January 3-5.

BOC and CIIS said the shipments were initially declared to contain plastic buckets, ladies’ blouses, slippers, dish plates, and cat litter. All in all, the ukay-ukay clothes were estimated to be worth around P2 million.

Customs Deputy Commissioner Juvymax Uy said the successful operation was another result of the coordination between the BOC and the Department of Agriculture (DA) and its attached agencies like the Bureau of Plant Industry.

“We processed the derogatory information received by the DA and shared with us. Based on these initial reports and investigation, we issued the AO (alert order) shortly before Christmas. I thank all our hardworking team members for ensuring that we can complete the examination of the containers before the holidays kick in,” he said.

According to the bureau, this is not the first time alert orders have been issued for shipments addressed to the same consignee. It disclosed that seven other containers consigned to SB Express Logistics and Business Solution Inc. are also on hold for possibly containing under-declared items or smuggled onions.

He also said that attempting to smuggle items into the country is an insult to businesspeople who pay the right tariff or charges to bring in products.

“The bureau has, so far, examined, detained, and seized hundreds of millions worth of shipments that contain agricultural products this month alone. If they think they can use the ukay-ukay to hide the onions, they are mistaken,” Ruiz said.

“We swore to protect the country’s borders from this kind of illegal activities. But much more than that, we are also trying to protect our people, many of whom are deeply affected—and have been crying out—against the prices of the most basic of our food products,” he added. 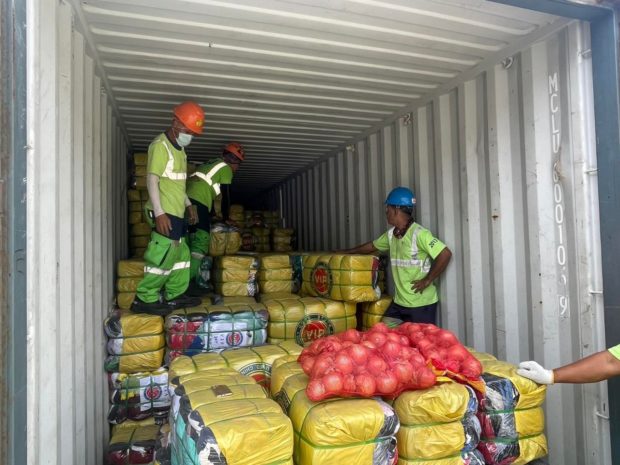 This photo from the Customs Intelligence and Investigation Services (CIIS) shows sacks of yellow onions which agents discovered upon inspection of three containers docked at the Port of Manila. The onions are concealed between stacks of used or ukay-ukay clothes. According to the Bureau of Customs, the shipments are consigned to SB Express Logistics and Business Solution Inc..

The retrieval of smuggled onions among used clothes came after the BOC announced on December 31 that they seized P139 million worth of smuggled agricultural products — the majority of which are red onions — from December 27-29.

The BOC estimated that from November to December 2022, the total value of allegedly smuggled agricultural products seized from shipments for SB Express Logistics and Business Solution Inc. from China reached P327.4 million.

The prevalence of onion smuggling is currently a major problem for the country, especially as prices of red onion recently skyrocketed to P600 or P700 per kilogram.  The Department of Agriculture had suggested a retail price of P250 per kilogram of red onion during the holidays or until the first week of this month.

President Marcos previously said they are mulling the release of smuggled onions to the local market to increase supply and hopefully bring prices down.